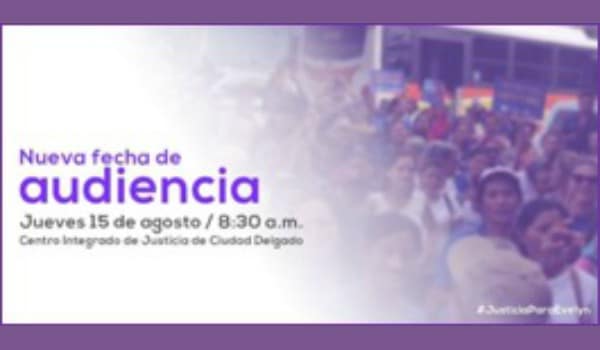 Evelyn is one of Las17. The Court of Cojutepeque ignored the evidence of Evelyn’s innocence and sentenced her to 30 years in prison for a stillbirth even though she was a victim of rape, had not realised she was pregnant, passed out from pain and blood loss when she gave birth while on the toilet, and evidence was provided that the death was due to the baby’s aspiration of meconium, none of which is her fault. The appeal hearing first opened on 15 July 2019, but due to the absence of one of the witnesses, the case was recessed and a new hearing date scheduled for 15 August at the Centro Integrado de Justicia en Ciudad Delgado.

In solidarity, Las 17 writes: “We call on the Salvadoran population to add their voices on 15 August to the demand for freedom for Evelyn. And we call on the Attorney General @FGR_SV to stop persecuting innocent women.“

The trial of Evelyn continues 16 August.