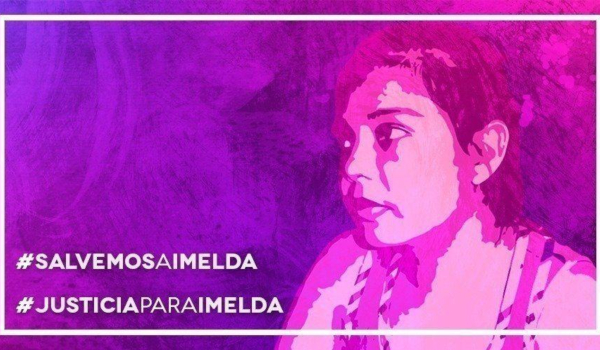 The Court in Usulután had to suspend the public hearing in the case of Imelda Cortez because the prosecutor, Bernarda Marisol Cáceres de Roque, sent a note to say she was ill and there was no one to replace her. The hearing was rescheduled for 17 December 2018. In the interim, Imelda Cortez will continue to be detained in San Miguel prison, where she has been awaiting trial since April 2017.

The Judge asked Imelda’s legal team if they had any comments on the delay. Arnau Baulenas, from the Institute of Human Rights of the UCA (Idhuca), asked the Judge to obtain a medical certificate from the Prosecutor, to prove she was ill. He complained that it took the Prosecutor’ office almost two hours to report she would not attend. He also mentioned the expense that this represents for Imelda’s legal team, her family and for the State. The Judge concurred.

While this was happening in the courtroom, dozens of women and men were expressing their support for Imelda, near the courthouse. Access to the courtroom had been closed early in the morning by the police, who admitted only a list of people who had registered to attend the hearing and journalists from national and international media. The diplomatic corps and representatives of international human rights organisations were also allowed inside, including representatives of the Office of the Procurator for the Defence of Human Rights (PDDH).

Bertha Deleón, legal representative of Imelda, protested that the December date was too close to the holidays, creating problems for Imelda to be transferred or for the witnesses to appear. She pointed out that that the preliminary hearing had been suspended seven times already, due to the absence of officials from the Public Prosecutor’s Office and the Ministry of Justice and Public Security, the failure of the Institute of Legal Medicine to carry out the expert examinations requested, once when expert reports were not ready on time in the court of the first instance of Jiquilisco; once due to the lack of transport of inmates from San Miguel prison; and once at the request of the judge. She also complained that it was not the first time that the date for the public hearing had been changed.

She stressed the costs of rescheduling the public hearing for Imelda’s family members, who had to travel from San Salvador and San Miguel to the Court of First Instance in Jiquilisco, and this time to Usulután. But worse, she said, was the “irreparable moral damage for the young woman, whose right to due process was being violated as well as her right to recover her freedom”.

Ana Julia Palacios, Imelda’s grandmother, regretted that her granddaughter did not regain her freedom that day. The news of the suspension of the trial upset her so much that she had to be taken to the National Hospital in Usulután. Imelda’s great-aunts also expressed concern for the young woman. They said that since Imelda had been in prison they had not been able to visit her due to lack of money, and expressed concern for Imelda’s health.

Imelda gave birth in the latrine of her home on 17 April. She said she had not known she was pregnant. Bleeding heavily, she was taken to the National Hospital of Jiquilisco, where she was arrested and accused of miscarriage. A day later, the Prosecutor’s Office changed the offence to “aggravated homicide”. This despite the fact that the clinical record shows the infant was born healthy and it was proved that the pregnancy was the product of sexual violence by her stepfather for seven years.

With banners from #SalvemosAImelda and #JusticiaParaImelda, activists in different parts of the country, e.g. Bajo Lempa, Morazán, Suchitoto and San Salvador, expressed support for Imelda.

Morena Herrera, president of the Citizens Association for the Decriminalization of Abortion, said that the Prosecutor’s office in Usulután did not want to replace the Prosecutor because of the risk that the public hearing would be suspended. “This is part of how the rights of the poor and poor women are violated.”

The Attorney General also does not want the case to have visibility, or lead to a mobilisation, or for international observers to hear about it. So they postpone and postpone, to evade the eyes of the international community,” said Paula Avila-Guillen, an international human rights expert. She reported that they had filed an appeal for Imelda to await trial outside of prison. However, the Prosecutor had insisted that she could escape or threaten the witnesses, and that she had to be detained until the trials ended.

Doctors at the hospital reportedly thought Imelda had attempted an abortion and called the police. She was charged with attempted homicide and denied bail. If convicted, she faces up to 20 years in prison.

An online petition at Change.org calling for her release has gathered 48,000 signatures to date.