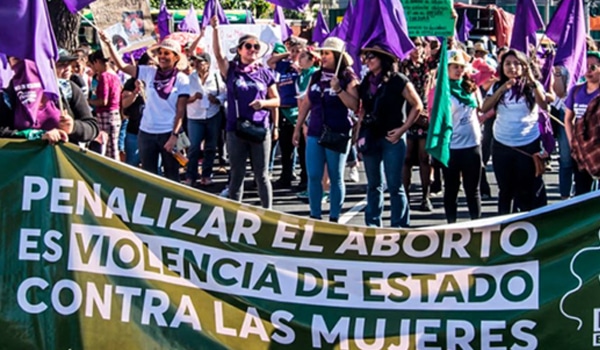 (Women without guarantees fight for the right to decide overtheir bodies)

El Salvador has repeatedly drawn worldwide attention due toits restrictive legislation on sexual and reproductive rights. From cases suchas that of Evelyn Hernández last year, initially sentenced to 30 years inprison, until today, when defamation is heaped upon health personnel who defendwomen’s health. Health professionals such as medical doctor Victoria Ramírez,president of the Salvadoran Medical Union for Women’s Health and Life, areattacked and harassed on social networks for taking on the defence of women’ssexual and reproductive health and rights.Conservative organisations arepromoting a campaign of defamation, ignoring the contribution of her work andexpertise to achieving legislative changes that will improve the reality inwhich the most vulnerable women in El Salvador live.

The experience of those who say they support thedecriminalisation of abortion and sexual and reproductive rights is one ofpersecution and harassment, in a country with some of the most rigid laws topunish and criminalize women who have abortions.Last year, although ElSalvador’s Supreme Court commuted the sentences of three women serving longsentences, efforts to reform the law have not yet got anywhere.

Recently, the Thomson Reuters Foundation has hadsight of recommendations to the government of to El Salvador from the UN WorkingGroup on Arbitrary Detention, which are as yet unpublished. The recommendationssay that three women put into prison for abortion-related crimes have beendetained unfairly and arbitrarily, that they were denied due process, and that theirconvictions should be reviewed. Two of the women are currently serving longsentences – one for 30 years. Both were arrested when they sought hospital carefor pregnancy complications. The third, a teenage rape victim, has already beenfreed. This is amid growing calls from inside and outside the country for theabortion law to be reformed.