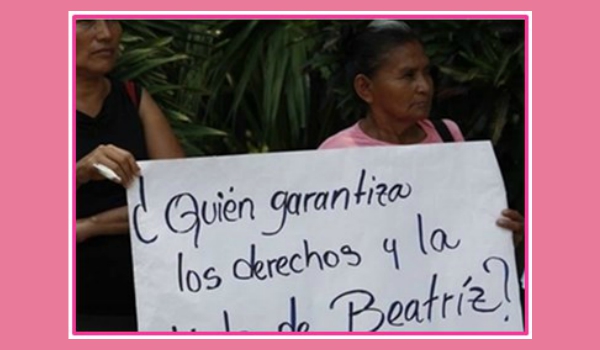 “Beatriz was our friend, a warrior, who never stopped fighting for her life,” said the Agrupación Ciudadana por la Despenalización del Aborto, in a statement.

Beatriz Garcia, whose fight against El Salvador’s draconian prohibitions on abortion moved the country – and the world – in 2013, died on 8 October from complications after a motorcycle accident a few days earlier.

“Beatriz” had struggled to terminate a life-threatening pregnancy in 2013; she suffered from an auto-immune disease discoid systemic lupus erythematosus, which was aggravated by lupus nephritis, an incurable disease that affects multiple organs. According to the Salvadoran Institute of Forensic Medicine, the lupus, combined with hospital-acquired pneumonia, ultimately led to her death.