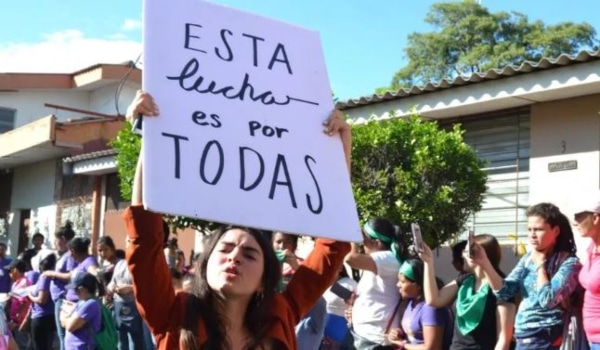 In the end, says Canada’s CBC News, “Imelda Cortez’s story was too much even for El Salvador’s famously harsh courts. It was making news around the world, and DNA had confirmed that the newborn she was accused of attempting to murder was the product of rape by a 70-year-old stepfather who had abused her throughout her childhood.” We reported on Imelda’s story in December 2018, when a judge threw the prosecution’s case out of court – but only after she had spent 18 months in prison.

Her story was reported in Canada just this past week. Why? CBC News reports that the Canadian government has contributed millions of dollars to El Salvador to assist in its fight against criminal gangs and to support training for police and the Salvadoran justice system. Former Canadian Minister of International Development, Marie-Claude Bibeau, said just before Cortez’s final hearing last December that she was seeking more information about how Canada’s assistance was being used. Her successor pledged to ensure that Canada’s ambassador would continue to attend these trials, raise concerns with the government, and continue to express the importance of ensuring women have access to justice.

CBC interviewed lawyer Omar Flores from the Salvadoran human rights group FESPAD (Fundación de Estudios para la Aplicación del Derechos) said there was a new gender policy that the Salvadoran government had brought in at the end of 2018, that was supposed to improve the situation for women and girls. But Attorney General Douglas Melendez, who was “showing signs of softening his approach” was removed by the National Assembly and replaced by a hardliner, Raul Melara. “Things seem to be back to where they were before… I think that before giving any kind of contribution, you have to really find out exactly what it’s going to be used for,” said Flores.

Two other women’s cases are pending in the country. One, aged 31, gave birth to a stillborn baby. Nowon conditional release because of a lifelong history of mental illness, she has been charged with aggravated murder and is facing 30-50 years in prison. The other, aged 20, said she didn’t know she was pregnant until she deliveredin a bathroom. She told police the baby was stillbornand that she had been raped by a local gang member. She spent 24 months in pre-trial custody before receiving a 30-year sentence. Thanks to an appeal by her lawyers, she now has a new trial starting 24 June.

“It’s more than just indifference from the prosecutor’s office to the plight of these women,” said Flores. “The prosecutors are the ones who are always pushing for the longest sentences…. They’re still pursuing the same approach: charge first and ask questions later,” said Omar Flores. “The trials continue.”

STOP PRESS: A young, Conservative businessman, Nayib Bukele, took office on 1 June as president of El Salvador. He has named eight women to top government posts, seven of them as cabinet ministers, but it is not yet clear whether women’s issues are on his agenda. The Agrupación Ciudadana, who work to defend and free all women from prison who have been criminalised for miscarriages, stillbirths and abortions, posted a series of tweets on 1 June. For example, one called on Bukele to work with feminist groups against violence against women as part of the national violence he has committed to reduce. Another tweet on his acceptance speech: “He has a debt to women: nothing [was said] about comprehensive sexuality education and less about sexual and reproductive rights.” And another: “What a good president, who is in favour of women’s lives and that the State should not criminalise them, but those who are survivors of sexual violence are forced to be mothers!”