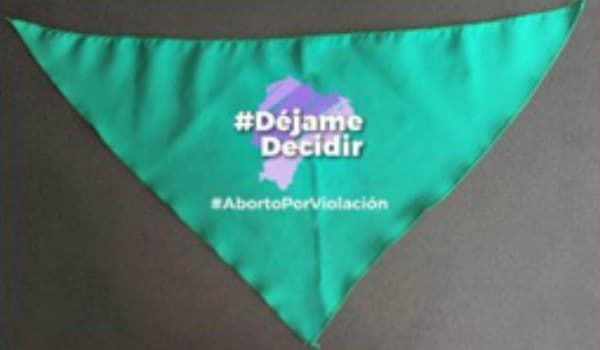 Ecuador’s legislators are currently debating penal reforms, including some that would allow access to abortion in cases of rape, incest and forced artificial insemination. Abortion is currently only allowed when the woman’s health is at risk or if the pregnancy is the result of the rape of someone with a mental disability.

Wearing green handkerchiefs and carrying placards reading: “Surviving an abortion is a class privilege”, dozens of women demonstrated in Quito outside the National Assembly on 6 August 2019 to demand the decriminalisation of abortion in cases of rape. The Ecuadorian versions of the green handkerchief have the hashtags #DéjameDecidir (Let me decide) and #AbortoPorViolación (Abortion in cases of rape).

Activist Micaela Camacho said: “Child pregnancy is a fact, and abortion after rape is the minimum reparation measure for these girls, who the state must not force to give birth.” Every year, around 2,500 girls under the age of 14 have babies as a result of sexual violence, according to Ecuadorian organisations, despite sexual relations with a child up to that age being legally classed as rape.