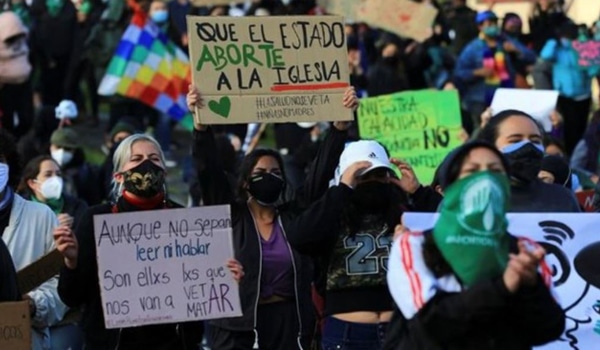 Top image: “The state should abort the church”

In Ecuador, a bill to decriminalise abortion in cases of medical emergencies, which had been approved by the Parliament, was vetoed on 25 September by President Lenín Moreno. He said on Twitter that he vetoed it for “technical reasons” and “because it does not meet the current needs of the population.I invite everyone to work on a new bill able to meet the health requirements of Ecuadorians”.After a presidential veto, the Parliament can revisit the same bill only after one year.

A majority of the members of Parliament had voted for the bill in August.The bill would have made it legal for any pregnancy in which an obstetric emergency developed to be terminated if the pregnancy compromised the health of the woman and/or the fetus.The bill also prohibited hospitals and doctors to refuse to provide treatment in such an emergency.In Ecuador, abortion is legal only when the woman’s life is in danger, with medical verification, or if the pregnancy is the result of the rape of a mentally disabled person.

Since 2014, a pregnant woman who induces an abortion or allows another person to do so can be punished with a sentence ranging from six months to two years in prison.If the woman dies during the procedure, the responsible person faces 16 years in prison.

On 28 September, hundreds of women marched in protest, calling for safe, legal abortion and criticising the alliance between the Church and the State in decisions like this. One placard said: “Nos violan,nos matany ahora nos quitan el derecho a decidir” (They rape us, they kill us, and then they refuse us the right to decide.) Perhaps the strongest statement made was:

Moreno is criticised for failing to introduce policies to help those in vulnerable situations, which he had promised to do at the last elections. He also refused to support the recent Comprehensive Health Care bill, several of whose clauses were proposed by feminist groups, including the right to hospital care for complications of unsafe abortion.

However, as activist Cristina Cachahuayco said: “Such victories have always been the product of long struggles, not the product of handouts from the government of the day.” She said feminist groups were preparing new days ofmobilisation, including in October to remember feminist support for the popular uprising a year ago, and in November, against gender-based violence.