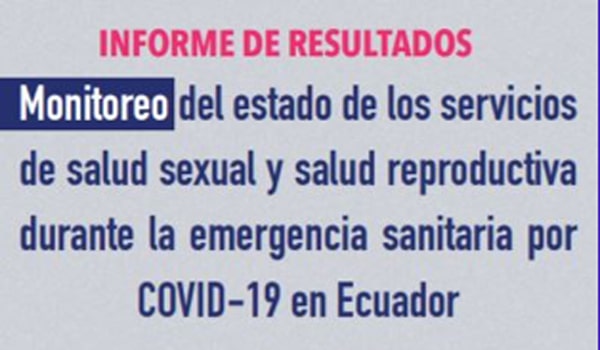 Summary of the results: The survey took place online in the 44 days between 17 July and 30 August 2020 during the pandemic in Ecuador. Information was gathered from a diverse group of women, including adolescents, trans and non-binary persons, who from 11 March 2020 tried to access sexual and reproductive health services in Ecuador. There were 512 responses received from 23 provinces. There was no responses received only from the province of Pastaza.

Getting a consultation in the public health service was difficult for 62%, in a private clinic 26%, and others 18%. 38% were unable to obtain a contraceptive method from the clinic they attended and 32% had to go to more than one clinic to obtain a method. Some 32% stopped using contraception as a result while 31% paid for a method elsewhere, and 42% could not access any contraceptive services. Adolescents were most affected, as many as 90% had difficulty either obtaining the method they wanted or not knowing where to go, or having to attend several times before being seen. Overall, 18% stopped using a method, 45% had to pay for the method, and 9% had to find a private clinic.

Of those who reported miscarrying or needing post-abortion care, 75% had difficulties finding care or had to attend several times before they were seen. (See report for conclusions…)

Overall, because the pandemic exacerbated the precarious situation of many women, it was those who did not have the money to access private services who were more unable to obtain them. Not enough public information on where to find contraceptives was provided. Lack of antenatal care was especially worrying.

Testimonies gave accounts of the suspension of gynaecological services both in the first level centers of care and hospital outpatient consultations, as well as difficulties to find specialist doctors and friendly care; with waits of sometimes more than 4 months to be seen. Although this problem has not been considered emergent during the pandemic, problems of greater seriousness and complexity in

sexual and reproductive health were important. An example of this can be seen in the need for attention to victims of sexual violence. Not all women who are victims of sexual violence need to go to the emergency room or report it, but they do need access to treatments for sexually transmitted infections, including HIV, and other conditions in primary level gynaecological care. This attention should be treated as essential.