Over the past five years, Ecuador has seen marked change. For the first time in the country’s history, Ecuador’s legislature supported an earnest and public debate on the importance of decriminalizing abortion in cases of rape during the criminal code reforms in 2019, and shortly thereafter, Ecuador’s highest court ruled that to criminalize abortion in cases of rape was unconstitutional.

This life-changing court ruling opens up the possibility for all women and girls who are survivors of sexual violence to freely access an abortion, if they choose, and marks a milestone in the fight for access to legal abortion in Ecuador. Even more importantly, women’s organizations prompted a shift in the way abortion is discussed in the media, what we call the “social destigmatization” of the right to choose.

These advances were urgently needed. A report published in July 2021 by Human Rights Watch, entitled Why do you want to make me suffer again?’: The impact of the criminalization of abortion in Ecuador shows the devastating consequences of the criminalization of abortion in Ecuador. The report highlights that of 148 cases studied during the decade from 2009 to 2019, 120 women and girls, 20 companions and 8 health providers “were criminally prosecuted for abortion, including 38 who served prison terms after conviction or were jailed during or before the trial”. The new legal reforms now taking place directly address some of these profound injustices.

A recent analysis of the ambitious strategies carried out in Ecuador demonstrate that this historic achievement was driven by the tireless commitment and years of work by activists and organizations that grew the sexual and reproductive rights movement in Ecuador. Women’s organizations worked to highlight the reality of sexual violence and forced motherhood, and pushed the country to reflect deeply upon the need for more just laws for women and girls and their bodies. All of these strategies that led to the court decision are now documented in this new publication by Planned Parenthood Global – It’s Legal – The decriminalization of abortion in cases of rape in Ecuador.

Planned Parenthood Global has the great privilege of accompanying and supporting these Ecuadorian organizations – backing the brave actions that led the work. This article walks through the milestones in this process and explains the numerous small victories that resulted in the decriminalization of abortion in cases of rape in Ecuador in April 2021.

Making the path by walking: a summary of small and big victories

Both the national progress made on the decriminalization of abortion as well as other regional achievements are most aptly understood through the contributions made by women’s organizations, and also other allied sectors – all who contributed to this profound transformation in the public discourse and the legal framework on abortion.

The following graphic shows the numerous steps along the way to decriminalization of abortion in cases of rape in Ecuador: 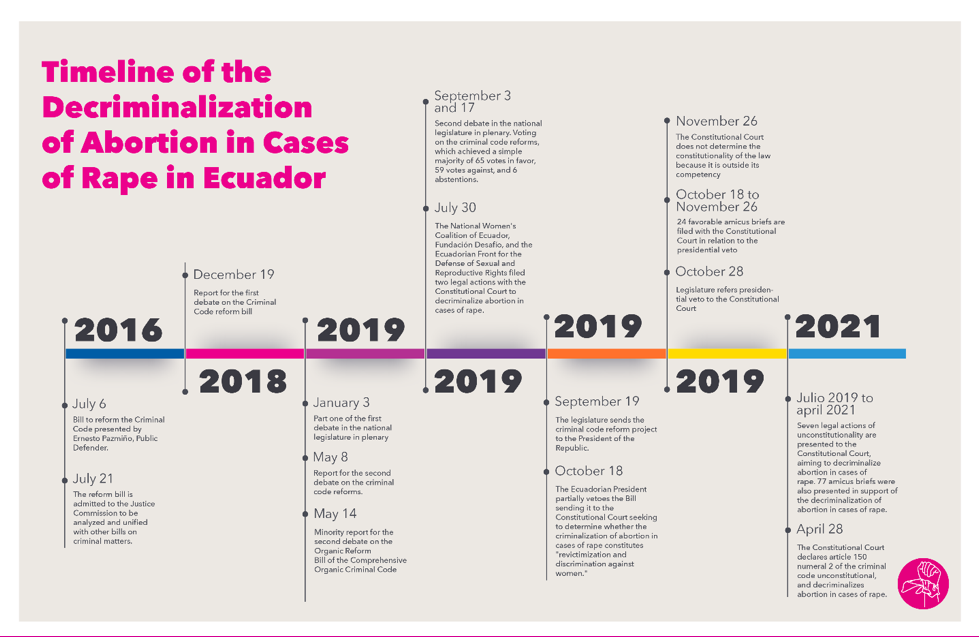 Victories along the way

A majority vote in favor of the decriminalization of abortion for rape
One of the most important achievements in Ecuador was garnering the support of the 65 legislators who voted in favor of the decriminalization of abortion in cases of rape (only 5 votes shy of the super majority needed to change the law). On top of a historic vote, these 65 votes were from legislators from differing political parties, including historically conservative parties and leaders.

A political debate based on evidence
Not only was there a political and public debate on abortion, but the technical quality of these debates was an important achievement. This evidence-based debate was a product of the consistent interventions and testimonies from various experts in human rights and sexual and reproductive rights, who raised their voices from the social, legal, public health and child rights sectors that were able to overcome misleading information, or personal prejudices. More often than not, the discussion of abortion in cases of rape was framed as a matter of public health and justice.

Overwhelming evidence
The investment in and dissemination of evidence and research was crucial in facilitating arguments in favor of the decriminalization of abortion due to rape, particularly information from: journalists, reports produced directly from the legislature’s own Justice Commission, reports from various United Nations committees and special rapporteurs, among other important studies published by civil society. The analysis highlighted the importance of several research pieces: Stolen Lives, The Costs of Omitting Sexual and Reproductive Health Services in Ecuador, as well as, media reports by Wambra and GK for the visibility given to forced pregnancy and maternity as a result of the high levels of sexual violence against girls in Ecuador. Furthermore, these reports continue to be an international wake-up call on the issue.

In addition, the supporting documents submitted to the Constitutional Court now constitute an overwhelming body of evidence in favor of the decriminalization of abortion for rape, which includes 77 amicus briefs submitted from various women’s, feminist and social organizations, unions, academia, journalists, activists and human rights defenders and representatives of public institutions, both from Ecuador and region wide.

Increased media coverage in favor of the decriminalization of abortion in cases of rape
This analysis showed that media coverage on abortion was common, but notably, became more balanced over time. In addition, there was a significant presence of favorable editorials and digital media coverage, including international pieces. In addition, spokespeople for the women’s organizations became recognized as expert sources on the subject, occupying a priority place previously reserved for conservative figures in the traditional and alternative media.

The campaign #NiñasNoMadres also contributed, by drawing widespread attention due to the alarming number of forced pregnancies among Latin American girls under 14 who survived sexual violence. There are thousands of girls and women in the same situation and the outrage has mobilized young people like never before, adding more and more voices to the movement throughout the country, and the region.

Progress towards the social destigmatization of abortion
Significant advances were made towards the social destigmatization of abortion in cases of rape. Previously, abortion was not openly discussed and seen as taboo, but the legal debate in the legislature made abortion conversations a daily topic. The people interviewed for “It’s Legal” highlighted significant changes in favorable opinions among the medical associations, unions, lawyers and journalists. In fact, 76% of Ecuadorians do not believe a women should go to jail for having an abortion.

Civil society strengthening
Women’s organizations grew and adapted to the challenges ahead of them. The capacity of women’s and feminist organizations to rapidly adapt their advocacy strategies within the legislative realm, then towards the Presidency and the Constitutional Court, forged a successful synergy between the strategies, and propelled high-level institutional dialogues that previously were thought impossible. The increased visibility, positioning and strengthening of the political dialogue by women’s groups, as well as the creation of strategic alliances with authorities were essential skills developed and employed during this process.

Ecuador’s advocacy pathway
The massive campaign and advocacy strategies carried out by women’s and feminist organizations to change the abortion law resulted in a historic milestone for the country. To celebrate these organizations, Planned Parenthood Global supported a systematic review and analysis of their efforts in order to document and memorialize the experience so that this information could be used by other human rights defenders, activists, spokespersons and others who advocate for sexual and reproductive rights.

The publication It’s Legal: The Decriminalization of Abortion for Rape in Ecuador compiles and documents their inspiring experience, offers information on the context, the main strategies implemented, the hard-won achievements, and the lessons learned. Our hope is that this publication serves as inspiration for our larger community of sexual and reproductive rights defenders who are pushing for structural changes that ensure that all people can decide autonomously about their bodies and their futures. This document can be used in various spaces and for many purposes:

What we have learned from Ecuador
The analysis compiled several lessons learned that are listed here, but more details can be found in the executive summary document:

Thinking about the future
This Ecuadorian victory adds to the inspiring advances taking place all across Latin America that guarantee the right to abortion. However, this budding revolution must still overcome important barriers before this law becomes a reality for all people, especially for those facing systematic inequalities such as indigenous and migrant women, trans and non-binary people with the capacity to get pregnant, those who live in rural areas, as well as girls and adolescents.

As we celebrate Planned Parenthood Global’s 50th anniversary, it’s a good time to renew our commitment to women’s and girls’ rights, and we do so by backing the brave Ecuadorian women who have become a powerful social and political force. As such, we envision the following as priority issues:

Acknowledgments
Planned Parenthood Global is especially grateful to the organizations in Ecuador who provided the input to develop this publication and who starred in these important advocacy activities that constantly pushed for the decriminalization of abortion in the country.

VIDEO IN SPANISH AND ENGLISH 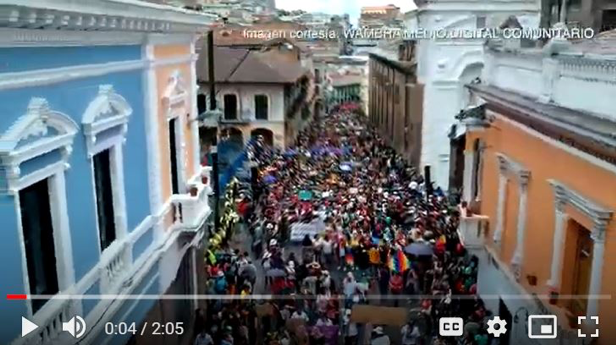 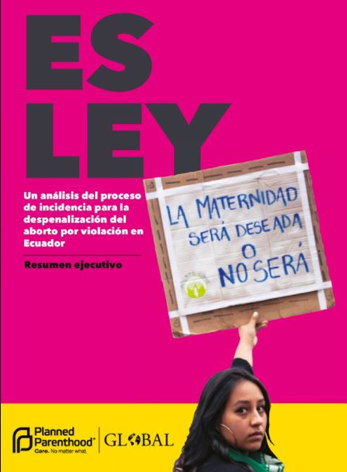 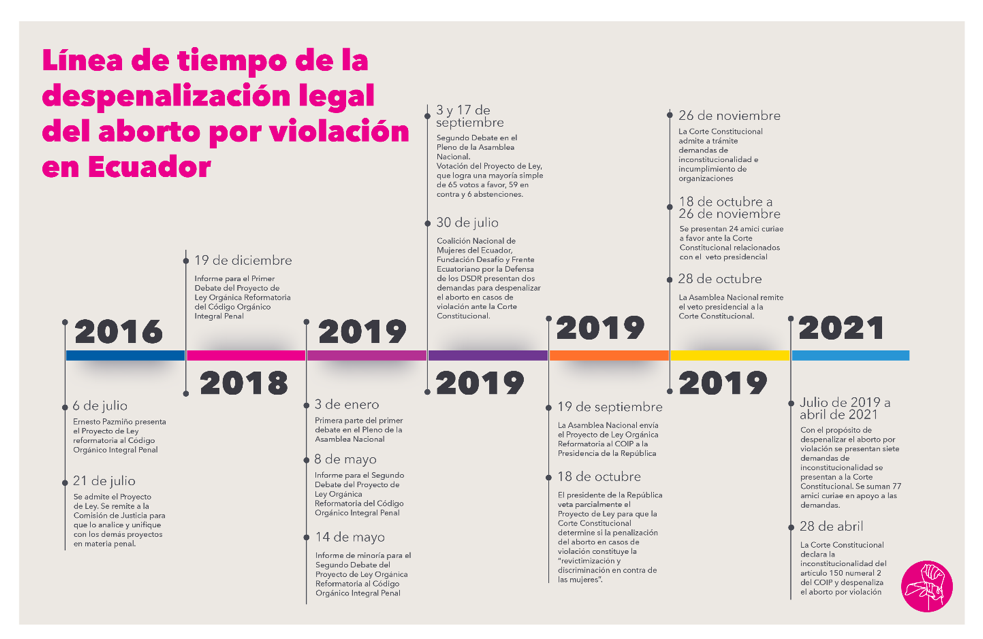