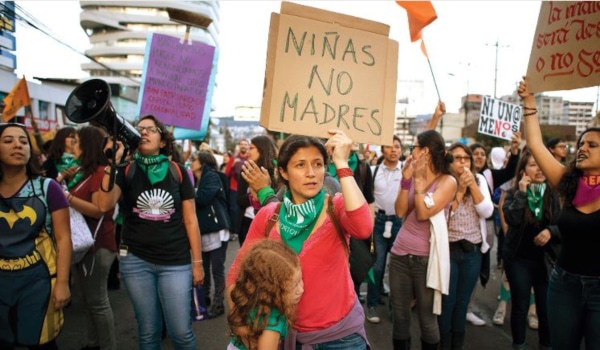 Ecuador first banned abortion in 1837, when the country established its original penal code. Since 1938, when exceptions were created for women whose health is in danger and in cases of rape when the victim is considered mentally disabled, the law has remained largely unchanged, albeit the subject of intensifying public debate. Despite the near-total ban, health officials recorded 431,614 abortions between 2004 and 2014. Unsafe abortion accounts for more than 15% of maternal deaths in the country.

Until a decade ago, the state rarely enforced the ban. Then, when feminists and the religious right clashed publicly over legal reforms, women seeking medical attention for abortion complications or other obstetric emergencies were suddenly subject to unprecedented scrutiny. Since then, abortion-related investigations and prosecutions have escalated. Between 2009 and 2014, Ecuador’s public defender recorded 40 cases of women prosecuted for abortion. Since 2015, according to government data, prosecutors have investigated at least 378 cases across the country, from teenagers to single mothers.

According to the legal organization Surkuna, which has defended more than two dozen women, most of those prosecuted live in deep poverty, and in many cases there are serious violations of the women’s rights by doctors, police, prosecutors, and judge, ranging from coerced confessions to manipulated evidence. Most were reported to police by medical professionals. A number of women reported being interrogated and pressured to confess in hospital rooms during a medical emergency. According to defence lawyers, doctors have threatened to withhold medical care from some women in critical condition unless they confessed. Others were advised to plead guilty even when prosecutors lacked enough evidence to convict them. Several women have been detained or prosecuted for unintentional miscarriages, often on the basis of discredited forensic methods. One woman charged with homicide after what her lawyers say was a late miscarriage is serving 22 years in prison.

Ana Vera, director of Surkuna, said “If you ask [doctors], they denounce [women for abortion] because they are protecting themselves from malpractice…” In 2017, concerns about doctors becoming an extension of law enforcement led the Ministry of Health to release guidance reminding them of their duty to maintain patient confidentiality, as mandated by Ecuador’s Constitution and criminal code, and to care for women with abortion-related complications. There’s little evidence, however, that the guidance has limited reports from doctors.

Surkuna was founded in 2014 to study what was happening and began to defend women who were charged, about 20 cases to date. The group CoMadres (Godmothers), founded by Tamia Maldonado, is one of a number of groups who operate hotlines to give information about how to use medication to safely terminate a pregnancy and has groups in several parts of the country. About 32 women contact the hotline for information and support each week.

Many activists working on issues like murder of women and sexual violence see these issues intersecting with illegal abortion. “The Ecuadorian state has not resolved the issue of protecting victims of abuse, even less if they are underage. But nonetheless what they have resolved is that they all have to become mothers,” said Geraldina Guerra, who directs a network of women’s shelters. “Not recognizing a women’s right to abortion is not recognizing women’s right to live without violence.”

Although Las Comadres has accompanied women from a wide range of class backgrounds and geographic areas, occasionally connecting only by phone with women who live in remote parts of the country, it’s the poorest, most marginalized women who are least likely to hear about them. “It’s hard to know we can’t reach all of the women,” Tamia Maldonado said. It’s also hard to know that they can’t solve everything for many of the women who seek help, particularly those living in situations of violence. “We want to help them fix their lives,” she said. “But abortion is just a tiny part of what they need.”

These two excellent articles include interviews with many women in Ecuador about their abortion histories and their lives, as well as the work of the activist groups fighting for safe abortion and women’ rights.