It all began in 2011, when as an Indiana congressman Donald Trump’s running mate introduced several anti-abortion measures, including the first bill to strip Planned Parenthood of all federal funding. Donations to Planned Parenthood have soared since the election earlier this month. Mike Pence, now Vice-President elect will be sent a gift certificate for every donation they receive.The National Abortion Federation (NAF), the national network of US abortion providers, also receiving donations, has taken up the same practice. On 14 November they published the following message on Facebook:”Thank you, Vice President-elect Mike Pence, for inspiring so many to fight for abortion access and donate in your honor. You can join them here: http://bit.ly/NAFDonate(Our Hotline staff will continue to provide direct assistance to women seeking abortion care. Our medical team will continue to help ensure the high quality of abortion care. Our security team will continue to protect the safety and security of our members. Our public policy team will continue to advocate against further abortion restrictions and for proactive measures to expand women’s access to abortion care. With your help. #WeSeeYou #WeFightOn #WeWontGoBack“Also on 14 November, the Huffington Post published a list of some of the US abortion providers and advocacy organisations and a list of clinics by state, urgning readers to donate funds or time as clinic escorts. 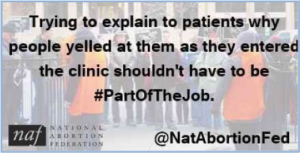 SOURCES: BBC, 14 November 2016 ; NAF on Facebook, 14 November 2016 and 18 April 2016 ;Huffington Post, by Jenavieve Hatch, 14 November 2016*** One woman (who used a coat hanger) has already spent a year in jail and now faces new charges in TennesseeAnna was first jailed in December 2015. The initial charge was attempted first-degree murder, which was downgraded last spring to aggravated assault. Now, on 12 November this year, three new charges were filed by the local County grand jury: aggravated assault with a weapon, attempted procurement of a miscarriage, and attempted criminal abortion. The new charges will replace the aggravated assault charge brought last year. Last month, her attorney filed a motion to dismiss the case, arguing that bringing her to trial “makes every pregnant woman vulnerable to arrest and prosecution if she is perceived to have caused or even risked harm to a human embryo or fetus…The prosecution is absurd, illogical, and unconstitutional.” The court date is 28 November.SOURCE: Mother Jones, by Becca Andres, 16 November 2016***   On 30 September, Daniel Grossman wrote: “Give women their reproductive revolution”“…In March of this year, the FDA approved an updated label for mifepristone, which has allowed physicians in Ohio and Texas, as well as North Dakota, to once again offer medication abortion according to evidence-based protocols. The fact that the FDA process of updating the label occurred without political interference is also cause for celebration.But beyond state-imposed roadblocks, though, there are restrictions on how mifepristone can be dispensed. When the drug was approved back in 2000, there were concerns about its safety profile that led to certain restrictions in how it could be distributed. For example, mifepristone can only be dispensed at a clinic, doctor’s office or hospital, and it cannot be obtained at a pharmacy with a prescription. A doctor who wants to provide mifepristone must enter into a relationship with the drug’s distributor and self-certify that she or he is competent to do certain things such as determine how far along the pregnancy is, which most physicians who treat reproductive-aged women do on a weekly basis.There is no doubt that these restrictions on where and how the drug is dispensed restrict access. It is a hassle to stock medications in one’s clinic, and in this era of violence against abortion providers, it is understandable that few physicians want to take the extra step of registering themselves with the company that distributes mifepristone and risk being identified.It is time for these dispensing restrictions on mifepristone to be removed. After 16 years of experience with medical abortion, it is clear that this option is very safe. A well-designed study of over 11,000 medical abortions in California found that less than one-third of one percent of patients had a complication requiring treatment in a hospital… and death after medical abortion is exceedingly rare.SOURCE: US News & World Report, by Daniel Grossman, 30 September 2016***   On 8 November 2016, Elisa Wells and Francine Coeytaux wrote: “Mail order abortion: the future is now”With the devastating election result and talk of abortion regulation reverting back to state control, it is time to generate outrage about the lack of access to abortion pills in the US compared to other countries. The time is ripe for creative strategies that put pills directly in women’s hands.SOURCE: Rewire, 8 November 2016