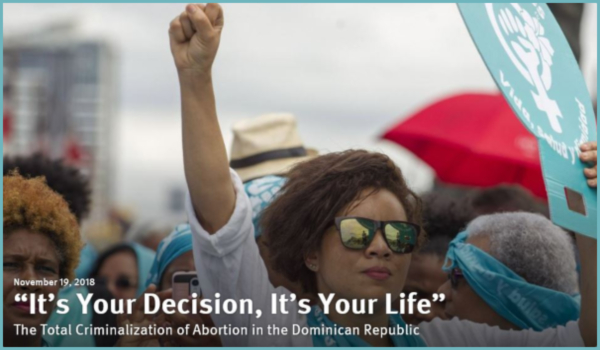 “For more than two decades, legislators in the Dominican Republic have debated a new penal code. President Danilo Medina has urged legislators to decriminalize abortion in three circumstances: when the life of the woman or girl is in danger, when the pregnancy resulted from rape or incest, or when the fetus has serious complications incompatible with life outside of the womb. He twice vetoed penal code reforms that maintained the total abortion ban without exceptions. As of October 2018, the National Congress had not enacted any changes to the country’s criminal code on this issue, and the total criminalization of abortion in all circumstances remained in effect.

“Overwhelmingly, women and girls described experiencing distress upon learning of an unplanned pregnancy, saying they felt “depressed,” “terrified,” “desperate,” or “trapped, with no future.” Some women chose to continue unplanned pregnancies that were also unwanted, either due to their personal beliefs about abortion, or because they feared clandestine abortion. More than half of the women and girls interviewed, however, attempted to have clandestine abortions and described these experiences to Human Rights Watch.

“Melina, 26, told Human Rights Watch she had an unwanted pregnancy in 2017 when her contraceptive method failed. Already a mother of four young children, she was deeply distressed when she learned she was pregnant. She tried to end the pregnancy by drinking a tea made from herbs and plants—one of many home remedies women use to try to end pregnancies clandestinely. She began bleeding and felt intense pain in her back and abdomen. Melina felt something had gone wrong but delayed seeking medical attention because she feared being reported to authorities, or facing abuse by medical providers, for having an illegal abortion. When the pain became unbearable, she went to a public hospital and explained that she made a tea to try to end a pregnancy. The abortion was incomplete: the pregnancy had ended, but tissue remained in her uterus, putting her at risk of serious complications. The provider prescribed a medication that helps the body expel tissue from the uterus and sent her away without examining her or giving her anything to manage the pain. Melina took the medication, but the pain persisted for ten days, and she developed an infection. “I started thinking I was not going to survive it.” When she spoke with Human Rights Watch, six months later, she still suffered chronic pain and other health effects from the ordeal. “It was really intense. I suffered a lot,” she said.”