Home » News » DOMINICAN REPUBLIC – March against the criminalisation of abortion 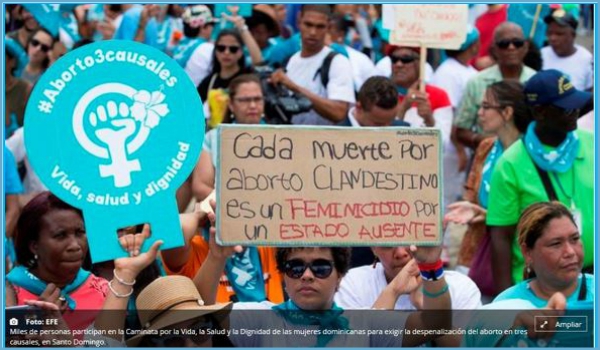 On 15 July, hundreds (one report said thousands) of people from more than 100 social and political organisations participated in the “March for Life, Health and Dignity of Dominican Women”, which called for the decriminalisation of abortion in the country on three grounds: when the life of the woman is at risk, in cases of rape or incest, and when the fetus is not viable.

The march went from the Dominican Medical College to the National Congress. Placards carried messages such as: “The rich abort, the poor die”, “The sins according to a religion do not have to be crimes for the nation” and “#Abortion3Grounds: the life, health and dignity of women”. There were also demands that legislators “fulfill their role as representatives of the will of the Dominican people, who have pronounced themselves in favour of the three grounds by a large majority.” The most recent national survey on abortion found that 79% of the population supported decriminalisation of abortion when the life or health of a woman is at risk, 76% when the pregnancy is unviable and 67% in cases of rape or incest.

“This activity is part of the actions carried out by women’s organisations and feminist associations. The women of the Dominican Republic cannot wait any longer. We have a very old Penal Code, from 1844! It is time for this country to be included among those who have decriminalised abortion at least in some circumstances,” said Milossis Liriano, an activist. On Twitter on 24 July, she said: “The three grounds for legal abortion that we want to make legal are a minimum standard of protection of women’s rights. We said it 10 days ago, and we repeat: WE WILL NOT ACCEPT LESS.”

Dealing with this problem requires strengthening public policies to reduce unwanted pregnancies and improve the quality and coverage of a wide range of contraceptive methods. It also means “guaranteeing access to comprehensive sexuality education, reducing teen pregnancy, and strengthening public policies on sexual health and reproductive health for the entire population, especially for young people and adolescents.”

In April 2018, the Justice Commission of the Chamber of Deputies presented to legislators a bill that would exclude from the Penal Code the three grounds named above, which has generated reactions both inside and outside the country.

A revision of the Penal Code tabled in 2014 has been vetoed twice by Danilo Medina, President of the Republic, who supports law reform, because it maintains the total criminalisation of abortion.