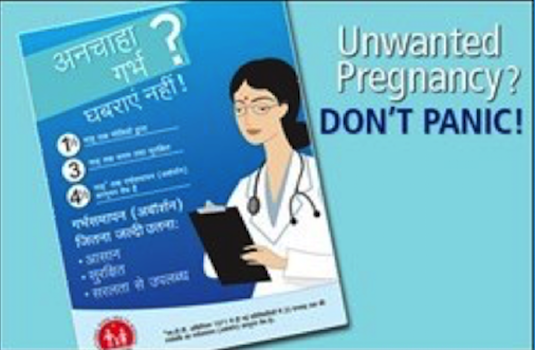 Lying in bed clutching her abdomen, a young Indian woman leans over her toddler to retrieve some pain relief from her bedside table at a private hospital in Delhi. Kiran, 22, had just had an abortion with D&C (dilatation and curettage), a painful procedure using general anaesthesia, cervical dilatation and scraped of the uterus, an out-of-date method which as not been recommended by the World Health Organization for many years because it carries a higher risk of complications, requires an overnight hospital stay and general anaesthesia, and a more highly skilled practitioner.

The hospital room is filled with other women, lying on metal gurneys after undergoing the procedure. Babli, 22, was five months pregnant when she found out her baby had anencephaly and could not survive. “It was my first child, and the procedure was so painful. I’m so depressed,” she says.

Despite the circumstances, both women were able to have safe abortions.

India’s abortion laws are liberal, allowing the procedure under almost any circumstances, but there is no guarantee the services will be safe. According to a Guttmacher Institute review about 9% of maternal deaths in India are still from complications of unsafe abortions.

At Vani Vilas hospital for women and children in Bangalore, Karnataka, doctors and nurses are being trained in manual vacuum aspiration (MVA) – a safer, quicker procedure – and how to better support the women in their care. MVA is significantly under-utilised in India. The training programme is run by Ipas in the 11 states that have the highest maternal mortality ratios, in order to certify doctors who haven’t undertaken post-graduate study to be legally allowed to provide abortion services.

Over the past 18 months, more than 150,000 women have received services by newly trained providers, with about 70% of those providers based in rural facilities. The trainees are also learning the importance of discussing post-abortion contraception choices with patients.

One session in the course is on pre- and post-abortion counselling, and being non-judgemental and supportive, which is often neglected by doctors, who don’t understand its importance. Many women face difficulties accessing services because of the stigma of having an abortion, lack of awareness and lack of services in their community, which disproportionately affects poorer women, often living in rural areas. As a result, many women take drugs purchased over-the-counter, increasingly misoprostol; many still rely on uncertified practitioners, who may or may not provide a safe method.

According to the WHO, in most Indian states fewer than 20% of primary health centres offer abortion services. Ipas is striving to change this. Dr Ganesh Sonavane works at a health centre in Pune and became an accredited provider last year. “Many women have financial troubles and their only option is to go to a private hospital, which is too expensive for them. After the training I’m giving very good and helpful abortion services to women who need it,” he says.