More than 300 feminist, women’s rights and abortion rights groups held demonstrations on 3 May in Buenos Aires and Tucuman to demand the release of a woman aged 27, called ‘Belén’ in press accounts, who was sentenced to eight years in prison for “aggravated homicide” last week.Belén had been held in detention awaiting trial for the past two years following an apparent miscarriage in 2014 in the northern province of Tucuman.The history of what happened, based on media and verbal reports, is as follows:In March 2014, Belén went to the emergency ward of the hospital Avellaneda in her home province of Tucuman. She was admitted to the hospital complaining of stomach cramps and abdominal pain. She was examined by a doctor, who told her she was miscarrying at five months (20 weeks) of pregnancy. She said in court that she did not know at the time that she was pregnant. The hospital gave her a sedative, and then sent her to the obstetric unit. She asked to go to the toilet and returned five minutes later, bleeding. Hospital staff later found a fetus, which they said was hers, and accused her of illegally trying to abort the pregnancy herself. They therefore called the police.Belén told the court: “Then a male nurse brought me a fetus in a little box, and insulted me. I told him that was not mine, and he said: ‘Look here, this is your child.’ The police took Belén from the hospital straight to jail to be charged. The medical examiner of the police examined the fetus; he said it was a 32-week-old fetus and had been alive when it was born. She was therefore charged with homicide.The discrepancies involved in this case are numerous and remain to be resolved, according to Belén’s solicitor and others. 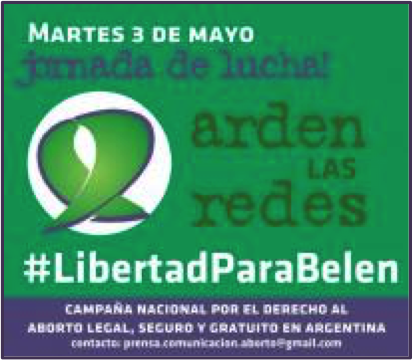 From miscarriage to illegal abortion to aggravated homicide Belén has become a symbol of the lamentable state of women’s rights in Argentina, where abortion is legal only in cases of rape, to save the woman’s life or preserve her health (UN Population Division 2002).”After being sentenced arbitrarily, and with no crime proven, we demand the immediate release of Belén who has been in jail since 2014,” said Raquel Vivanco, director of feminist organization MuMala.Congresswoman Victoria Donda is quoted as saying Belen was subjected to degrading treatment.The Campaña Nacional por el Derecho al Aborto Legal, Seguro y Gratuito (National Campaign for Legal, Safe, Free Abortion) in Argentina launched the call to action on social networks and asked supporters to rally in front of the courts. Linked with the right to family planning, this mobilization is demanding the release of Belén and the right to safe, legal abortion in good conditions for all women, in Argentina and everywhere in the world.The criminalization of abortion, they say, is because of a logic of control over the bodies of women, under the influence of reactionary religious forces. Access to abortion in the best conditions is an issue of individual freedom and public health, and these campaigners will fight tirelessly to defend it.Belen’s solicitor Soledad Deza has taped a 3-minute analysis of the irregularities in the court proceedings and explains the way in which the accusation of homicide was constructed (in Spanish): https://cynthiagarcia.com.ar/2016/05/04/libertadabelen-la-abogada-de-belen-explica-las-irregularidades-del-caso-y-como-lo-construyeron-en-homicidio/Member of the national congress Soledad Sosa (@soledadsosa2013) has tabled a resolution demanding the immediate release of Belén and the nullification of her sentence.Amnesty Argentina has called for an urgent action. Belén’s solicitor has said that the sentence will be appealed.To follow on Twitter, look at:@Campabortolegal 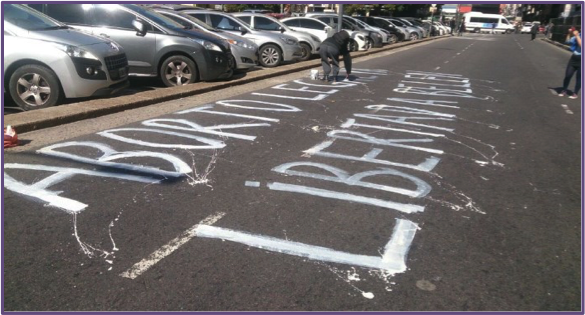 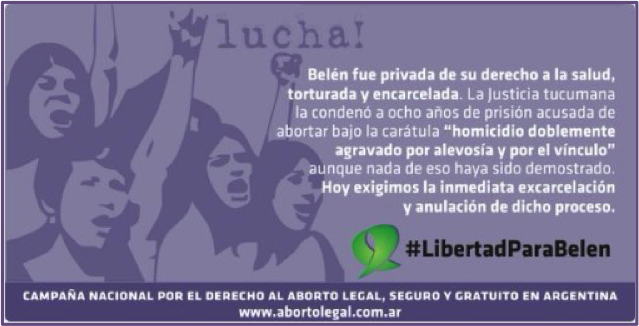 #‎LibertadParaBelenYaSOURCES:http://www.france24.com/en/20160427-protest-planned-support-argentine-woman-jailed-miscarriagehttp://www.lesnouvellesnews.fr/argentine-mobilisation-internationale-liberation-de-belen/http://www.planning-familial.org/actualites/soutenons-belen-argentine-condamnee-8-ans-de-prison-pour-un-avortement-suppose-0027809Thanks to Mariana Romero from CEDES in Argentina for additional information and corrections to this text.