Home » News » Decriminalisation of abortion: a discussion paper from the BMA, UK 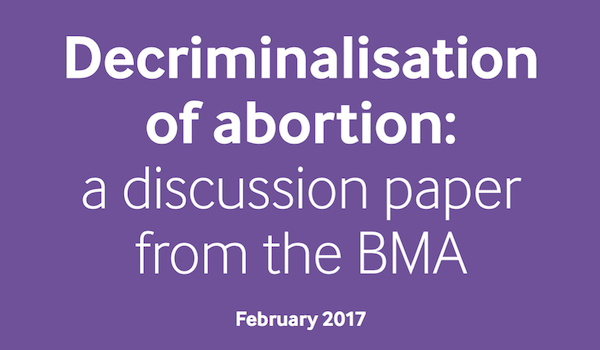 “The British Medical Association currently does not have policy on the decriminalisation of abortion, and this paper does not include recommendations about whether, and if so how, abortion should be decriminalised. Instead, a number of arguments, put forward by others, in favour of and against decriminalisation are set out in part two of the paper. These invite the question – what role, if any, should the criminal law play in setting parameters for the provision and administration of abortion? Would some form of decriminalisation be better than the current legislative framework?

> The current law around abortion is set out in detail in part one of the paper. In summary, induced abortion is a crime throughout the British Isles. There are, however, a range of exceptions to the crime laid out in statute and/or common law.

> There have been several criminal prosecutions in recent years relating to abortion. In addition, there have been a number of cases where women have purposefully exposed themselves to the risk of prosecution, or where individuals have deliberately, and unsuccessfully, sought prosecutions of doctors who authorise or carry out abortions. Cases have included:

> individuals who have illegally supplied abortifacients

> women who have procured and self-administered abortifacients

> individuals who have procured abortifacients on behalf of others

> individuals who have maliciously and covertly tried to procure an abortion or administer an abortifacient; and

> doctors who have been challenged for their involvement in the provision of abortions they deemed to be lawful.

> Whatever one’s view about the principle of the decriminalisation of abortion, there are some issues on which there appears to be broad consensus. For example:

> the need for a woman’s informed consent to an abortion, or a best interests assessment where a woman lacks capacity

> the right to conscientious objection by healthcare workers

> the collection of abortion data

> the need for robust clinical governance in settings where abortion care is provided; and

> the continued regulation of, and the setting of professional standards in, the provision of abortion services.