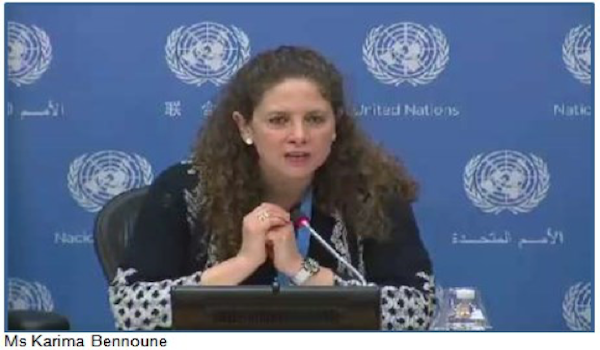 The UN Special Rapporteur in the field of cultural rights, Karima Bennoune, told the Human Rights Council in Geneva: “We face a global avalanche of hate in the form of rising fundamentalism and extremism around the world. This must be tackled with urgency, using a human rights approach. Culture and cultural rights are critical components of this response”.

The Special Rapporteur is deeply concerned at the normalization of fundamentalist and extremist ideology and rhetoric in many political, cultural and media contexts, in diverse forms and in all regions of the world, and the increasing embrace they find in mainstream political parties and candidates.

In her report to the UN Human Rights Council, the expert highlights how diverse fundamentalist and extremist ideologies have in common a mindset based on intolerance of differences and pluralism, and all attempt to stamp out cultural diversity and dissent.

“These ideologies abuse cultural rights by stifling freedom of artistic expression and curtailing scientific freedom,” she said. “They impose ways of life, including through pressuring educational institutions, personnel and students, targeting minorities, promoting discrimination that infringes on the right to take part in cultural life, erasing symbols of coexistence, and undermining the universality of human rights”, she added.

The Special Rapporteur stressed that cultural rights are a critical counterweight to fundamentalism and extremism and called for more to be done to guarantee the conditions for all to fully enjoy them. “The arts, education, science and culture are among the best ways to fight fundamentalism and extremism and to prevent or stop the human rights violations to which they give rise. They are not luxuries, but critical for promoting inclusion, making space for peaceful contestation and protecting youth from radicalization,” Ms. Bennoune emphasized.

In her report, Ms. Bennoune called for policies to combat discrimination in the right to take part in cultural life or promote freedom of artistic expression, scientific freedom and education as core aspects of combating fundamentalism and extremism. She also called for policies to promote and protect the separation of religion and State, and ensure that those at risk from fundamentalist and extremist abuse, including as a result of exercising their cultural rights, were not returned to any contexts where they will be at risk of xenophobic attack. “It is a tragic spectacle to witness victims of one form of extremism becoming victims of another when they seek safe haven”.

In the report, the Special Rapporteur points to cases from all regions where fundamentalist and extremist ideology has motivated abuses of cultural rights by state and non-state actors; she condemns attacks on freedom of artistic expression in Russia, Saudi Arabia, India and Iran, and on intellectuals in Bangladesh. Ms. Bennoune said diverse forms of fundamentalism and extremism, though sometimes viewed as opponents, often actually reinforce each other. “One form of fundamentalism or extremism is not a justification for another. Each is a reinforcing reminder of the global humanist crisis that lies before us. We must break out of this vicious circle that will leave youth globally facing a political landscape offering only a bleak choice of competing extremisms”.