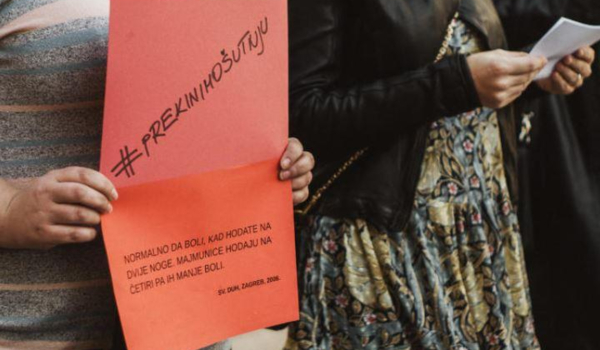 Ivana Nincevic Lesandric, member of Parliament from the centre-right MOST party shared a personal story in Parliament of having had an abortion after a miscarriage in a Croatian hospital, which revived a public debate on the state of women’s health care. She said doctors had tied her hands and legs before doing an extremely painful curettage to remove tissue from her uterus without anesthesia. She said the conditions were “from the 15th century” and the most painful 30 minutes of her life, and that many Croatian women have experienced this. In response, Minister of Health, Milan Kujundzic, said “it does not work like that in Croatian hospitals.” Little did he know.

Within three days, Parents in Action – RODA, a group that advocates for dignified pregnancy, parenthood and childhood, collected and sent the Minister 400 testimonies from women who had had similar experiences. The slogan of the movement to stop violence against women in hospitals is #BreakTheSilence / #PrekinimoŠutnju.

On 19-20 October, in front of the Croatian Parliament and in various cities across the country, activists from RODA and other organizations dedicated to women’s health and rights read over 20 testimonials of women from all parts of Croatia. They spoke about humiliation, pain, callousness and inadequate medical procedures, endangering their mental and physical health and causing permanent distrust of the health system. They told decision-makers that the time had come for the systematic protection of women from the reproductive violence they have endured in the public health system for years.

RODA called for urgent adoption of a Woman’s Health Action Plan which will include enforcement monitoring measures and adequate funds so that the power of these women’s words can finally be channeled into action to protect women from humiliation, discrimination and reproductive violence in the public health system – based on the principles of humanity, availability and patient co-decision making – which they pay for through health insurance and taxes. “Because of the experiences and trauma of all of us, thousands and thousands of women, we are calling for the adoption of this Action Plan right away, and by December 10th, 2018, the International Day of Human Rights. This Action Plan does not require any exceptional actions, only the systematic application of existing legal provisions, with strong and independent quality control measures, as well as measures for the prevention and sanctioning of abuse in healthcare. This is the only way that Croatia can in practice, and not merely in words, be ranked alongside the European countries with which it frequently likes to compare itself in terms of the quality of healthcare provided,” said Branka Mrzić Jagatić from RODA.

A letter of support for the protest action was sent by well-known gynaecologist Dr Jasenka Grujić Koračin, who said: “These latest events, that make me so sad and embarrassed, ashamed, are proof that in Croatia, declarations of human rights and women’s rights are only formally respected. The stigmatization and insults that women who are determined to defend their autonomy and privacy endure has spread to other areas, and to nearly all gynaecological–obstetric activities… in a way that is typical of clerical-conservative societies. This is not about the excesses of individuals without manners, this is about a real discriminatory and misogynistic process that we must resist together.”

Watch the film on the situation in Croatia on You Tube and click here and here for media releases.

SOURCE: Parents in Action – RODA in CEE Bulletin on Sexual and Reproductive Health and Rights; No 8 (178) 2018