Home » News » Criminalizing pregnancy: policing pregnant women who use drugs in the USA 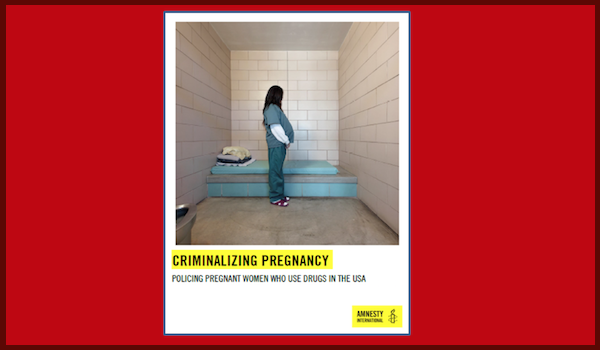 Over the course of three years, Amnesty International, led by Carrie Eisert, Policy Advisor, analyzed US criminal prosecutions of women who are pregnant and alleged to use drugs. These cases are based on claims of promoting maternal and infant health, but in fact are about arresting and punishing women who are pregnant and use drugs. The report concludes that prosecutions that criminalize pregnant women violate women’s human rights.

All of the cases discussed in this report, and the majority that have been documented by researchers and advocates, involve women who were dependent on drugs while pregnant. However, most of the state laws that criminalize pregnant women are not specific to drug use but are more general “fetal assault” laws which include fetuses within the legal definition of a “victim” of assault. Laws identifying fetuses as potential “victims” can have the effect of putting pregnant women’s rights at risk, regardless of the law’s intended purpose. Most “fetal assault” laws do not exempt pregnant women from committing crimes in relation to their own pregnancies. As a result, the laws have been used to prosecute women who have miscarried or are believed to have harmed their fetus.

Advocacy groups and scholars have documented cases in which pregnant women have been arrested for otherwise legal activities such as refusing medical interventions, including caesarean surgery or even for attempting suicide. For this reason, key legal advocates told Amnesty International that regardless of their intended aim, the laws can have the effect of punishing women for their pregnancy status.

Pregnant women may also receive more severe punishments for crimes if their embryo or fetus is considered to be a legally separate “person”. For example, driving without a seatbelt may be punishable by a small fine, but in one case in Tennessee it was considered felony “reckless endangerment” because a court interpreted a woman’s fetus as a legally separate “person”. The vague and overbroad nature of pregnancy criminalization laws mean that almost any behavior perceived as harmful can be criminalized, inviting discriminatory application against marginalized women.

There is no comprehensive data on the exact number of women who have been charged with a crime related to their pregnancy. State governments do not collect this information, and even identifying these cases is complicated due to the number of different laws that may be applied. Researchers, advocates and investigative reporters told Amnesty that since 2005, approximately 500 women have been charged with “chemical endangerment” in Alabama, 100 with “fetal assault” in Tennessee, and over 100 with unlawful conduct or neglect in South Carolina. According to National Advocates for Pregnant Women, the leading national advocacy organization working to secure the civil and human rights of pregnant women, hundreds of others across the country have also been charged.