Home » News » COSTA RICA – Stronger together: A feminist’s view on the 8 March in Costa Rica 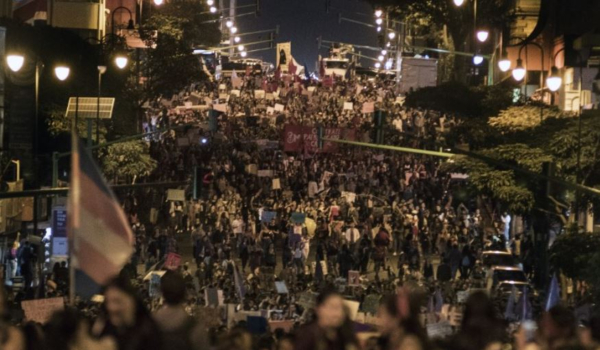 Last Friday night, on International Women’s Day, women wanted to organize to fight the patriarchy together. This year the agreed upon slogan wasMás juntas que nunca (More together than ever), meaning collectivity and togetherness would be at the very core of the march. International Women’s Day is crucial to the year-round struggles we face as women, it commemorates the achievements the feminist movement has gained and recognizes the plight women around the world still face.

Undoubtedly there have been a series of advances in terms of gender equality in the last decades, but gender inequality is still very much a part of how our society organises itself and distributes power. Costa Rican women decided to address inequality by showing up and saying what was on their minds.

Taking to the streets is fundamental. It lets us reclaim a hostile space where women of all ages face harassment and sexist culture on a daily basis. It also exposes the movement to its own numbers. It is impossible to say the feminist agenda is being pushed by just a handful of rebellious women whenAvenida 2is packed with thousands of women walking and chanting side by side for hours. Organizing, mobilizing and securing that many people obviously required hard work and that work was done by women.

We are stronger because we are able to come together despite of our differences and push forward a series of social, economic and political changes that will benefit all women. We yelled for violence against women and girls to cease, we sang songs about the rise of feminism and we held up posters advocating for equal pay, prompt justice, accountability of public officers and respect. There were more signs than I had ever seen at other 8M marches and more hands holding them. Organizations marched with broad messages, the majority short and to the point. There was a largeFirme YAsign aimed to catch President Alvarado’s attention for therapeutic abortion regulation that is long waited.

Due to the political climate in our region there were women from Nicaragua and Venezuela marching alongside us, backing us up and receiving support as well. There was a voice coming in through a speaker called upon us to cheer for them as they fight for their rights from abroad…

The author is one of the coordinator of the Asociación Ciudadana ACCEDER in Costa Rica, who are campaigning for the right to legal abortion.