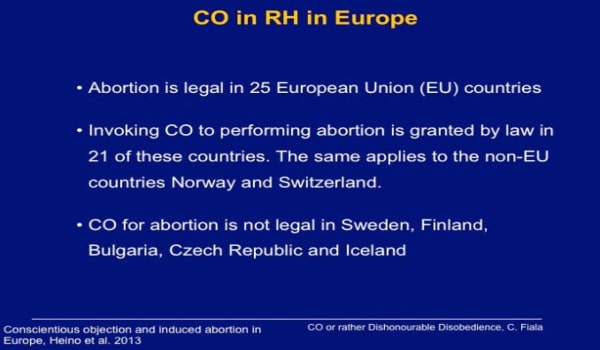 Some years ago I had a registrar who was and remains a devout Buddhist. He was shocked when he attended my gynaecology operating list: “Abortion is a sin!” he exclaimed. Sometime later he revised his thoughts: “Abortion is a sin, but I don’t see why you should have all the sin. I will share this sin with you”. He had, in his own way, changed his mind.

Conscientious objection (CO) remains an important issue in clinical practice, particularly in relation to the provision of abortion. In England, Scotland and Wales, the Abortion Act 19671states that: “no person shall be under any duty, whether by contract or by any statutory or other legal requirement, to participate in any treatment authorised by this Act to which he has a conscientious objection”.

The Royal College of Obstetricians and Gynaecologists (RCOG) has issued guidance for traineesfor further clarification, which emphasises that doctors may opt out of witnessing and performing abortion, but that they must not withhold clinical advice to patients or impose their views on others. They should make the preparatory steps to arrange an abortion where the request meets the legal requirements, and these might include referral to another doctor. Such rights need to be balanced by the requirements of the General Medical Council (GMC), as stated in its publicationDuties of a Doctor, and do not cover other areas of possible CO, such as contraception…