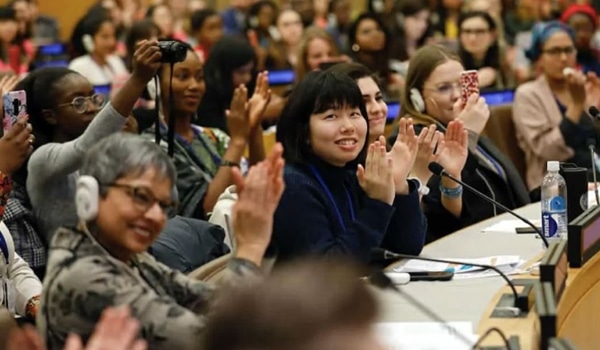 From the start, says PassBlue, the diplomats leadingthe negotiations on the new political declaration celebrating 25 yearssince the 4th World Conference on Women in Beijing in 1995 – being preparedfor the United Nations’women’s rightsconferenceon 9-20 March 2020 –wanted to keep it short and sweet. That meant five pages maximum.

But here is what one of the anti-women’s rights, anti-abortion men who aimto sabotage the meeting – AlexAzar, US Secretary of Health and Human Services – said about the proposed content of thepolitical declaration:

“I am sure you are allfamiliar with the constant drumbeat in the halls of the United Nations and theWorld Health Organization to normalize the terms ‘sexual and reproductivehealth’ and ‘reproductive rights’. What reproductive rights are they talkingabout? In this context, it is increasingly becoming clear that some U.N.agencies and countries want this to mean unfettered access to abortion, and wecannot let this threat go unanswered…. If the other side’s goal of makingabortion an international human right becomes a reality, it will mean allcountries with laws protecting the unborn will be in violation of internationalhuman rights laws, with all the consequences that could carry.”

The draft of the politicaldeclaration, entitled “Political declaration on the occasion of the 25th anniversaryof the Fourth World Conference on Women”, presented by the CSW 64 Bureau on 27January 2020, was supposed to appraise the gains and the barriers that remainfor women to realise full empowerment. But in the real world, where men likeAlex Azar still dominate – as UN Secretary-General António Guterres points out– women’s rights remain up for grabs. In the US, for starters, women’s rightsare used as political tools to secure votes and to diminish women’s status insociety. (The only area where women appear to dominate is housework.)

Women have made strides since 1995 across many sectors: from increasing their participation in politics to demanding equal pay and legal recourse for sexual harassment and abuse to enrolling in schools in record numbers. But the gaps just keep expanding.

In light of the current concerns regarding coronavirus disease (COVID-19), at an informal meeting held on 2 March, Member States decided that the 64th session of the Commission will convene on 9 March, at 10.00 am, for a procedural meeting that will include opening statements followed by the adoption of the draft Political Declaration and action on any other draft resolutions. The session will then suspend until further notification.

The meeting reiterated the Secretary-General’s strong recommendation that capital-based delegations and other stakeholders refrain from travelling to UN Headquarters. No general debate will take place and all side events planned by Member States and the UN system in conjunction with CSW64 will be cancelled.