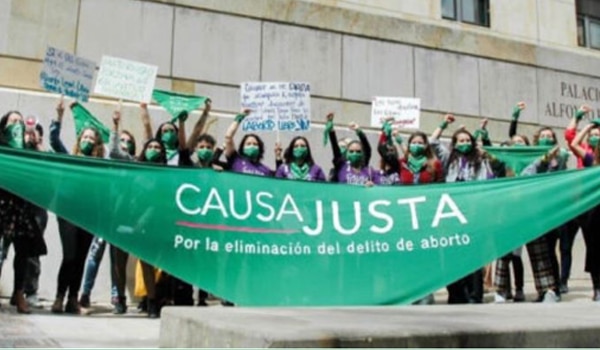 On 16 September 2020, the Causa Justa (Just Cause) movement, made up of more than 90 organisations and 134 activists from across Colombiafiled a lawsuit before the Constitutional Courtto declare Article 122 of the Penal Code unconstitutional because it is inefficient and unfair, especially for women in vulnerable situations, and violates fundamental rights, not only of women, but also of health personnel.

On 20 October 2020, the organizations and activists of the Causa Justa movement announced that the Constitutional Court of Colombia had agreed to consider whether the continuing criminalisation of abortion was unconstitutional. If they agree, it could make the crime of abortion disappear from the Penal Code.

The lawsuit argues that using the criminal law to regulate abortion is the main structural barrier to accessing an abortion even for legal reasons, and makes access to legal and safe abortion in Colombia inequitable and limited.Due to these barriers, only 1-9% of abortions are carried out within the health system, mostly in the main cities.Despite many efforts to implement the law, women who are most vulnerable continue to resort to unsafe abortions that endanger their health, their lives and their dignity.

Evidence-based studies have also found an impact on healthcare personnel,and barriers to access abortion for migrant women in the context of massive migration in the country.They have also also shown that the Office of the Prosecutor has continued to open criminal proceedings against the youngest women, those who live in rural areas, and those who are victims of domestic violence and other types of violence, despite the fact that the change in the abortion law should have reduced the number of these cases after it was passed in 2006.

They say they trust that the Constitutional Court, which has been characterised by its legal rigour and the defence of women’s rights, will pass judgment in line with the arguments of this lawsuit, to guarantee the full citizenship of women, which respects their freedom, autonomy and self-determination regarding decisions about their own bodies and their life.