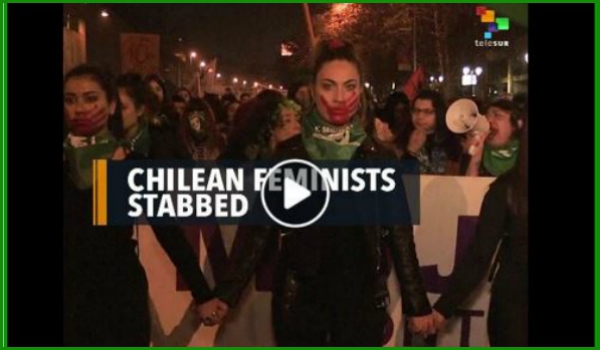 Human rights activists and feminist groups have expressed shock and anger after hooded attackers tried to stop the march and attacked three women at a huge rally in support of safe, legal abortion on 25 July in Santiago. One of the women was wounded in the abdomen and two others in the legs. A policeman was also hurt in the incident. “With the huge power and size that the feminist movement is reaching,” says the Telesur TV video report, “machista right groups are counter-attacking and there is a concerning trend of violence against pro-choice activists.” And not for the first time.

“The protest began festive, but we felt the mood turn when we heard that a group of extremists had put up barricades and scattered animal guts on the ground,” said Antonia Orellana, a member of the Chilean Network Against Violence Toward Women and the leftwing Frente Amplio party.

In a video by Telesur TV, one leader said: “Whenever something like this happens, our response is to get stronger, to keep fighting for our rights, and not allow fascist actions that do not represent a democratic state to intimidate us in our legitimate fight for something as basic as our right to life.