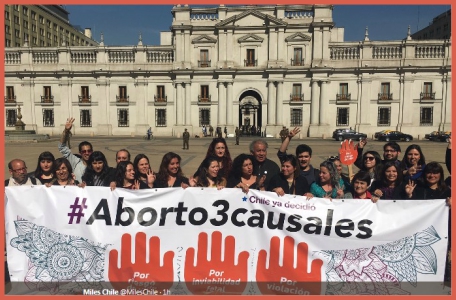 The ten judges of Chile’s Constitutional Court decided on 18 August to postpone their final judgement on the constitutionality of the abortion law passed by the Congress to decriminalize abortion on three grounds. But yesterday, in the afternoon, they approved all three grounds in the law, despite less certainly  over the ground of rape, which had generated more controversy.

Women’s rights groups, concerned about the delay last week, held three days of peaceful demonstrations in front of the Court. But after the announcement of the decision that all three grounds were approved, MILES Chile held up their banner in celebration, with this message on Twitter:

“Agradecemos a todas las personas, instituciones y partidos que apoyaron durante todo el proceso el #Aborto3Causales | Gracias totales!” (Heartfelt thanks to everyone who supported us during the whole process of fighting for abortion on three grounds. Total thanks!)