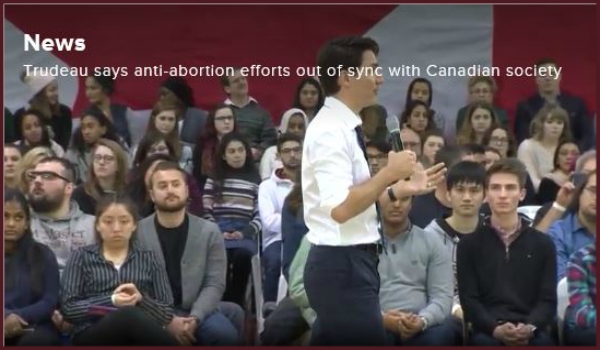 The position of Justin Trudeau on abortion irritates the American right
Unusual in the annals of Canadian-USA relations, the Canada Summer Jobs programme now excludes anti-abortion organisations from receiving governmental subsidies to employ students. A new directive of the programme requires Canadian organizations who wish to obtain a grant to hire students to certify that neither their fundamental mission nor subsidised employment will violate human rights related to reproduction.

When the story was reported on Fox News in the USA, it seems anti-abortion groups there complained that their Canadian brethren were being muzzled and excluded. Mr Trudeau discussed the issue in an interview the same morning with the Canadian press. The Prime Minister explained that as a Roman Catholic, he had quickly had to reconcile his religious beliefs with his responsibilities for national policy, and concluded that those responsibilities required that he protect individual rights under Canada’s Charter of Rights and Freedoms – in this case, the rights of women to have autonomy over their own bodies. C’est ça, eh!

Should anti-abortion groups be allowed to register as charities? The view from Canada

Of the close to 300 branches of anti-abortion groups listed in a new accounting in Canada by the Abortion Rights Coalition (ARCC) of Canada, 77% appear to hold charitable status. Both ARCC and Action Canada for Sexual Health and Rights say this should not be allowed. Darrah Teitel of Action Canada called for the government to go further and revoke the charitable status not only of groups that advocate against abortion but also those that are anti-gay because they often disseminate false and intentionally misleading health information, which affects people when they seek reproductive and sexual health services. Access to the Summer Jobs Programme was restricted after a series of reports by journalist Amanda Connolly that revealed anti-abortion groups had been using the programme to obtain thousands of dollars in public funds to advocate against abortion and support the efforts of anti-abortion so-called pregnancy advice centres.