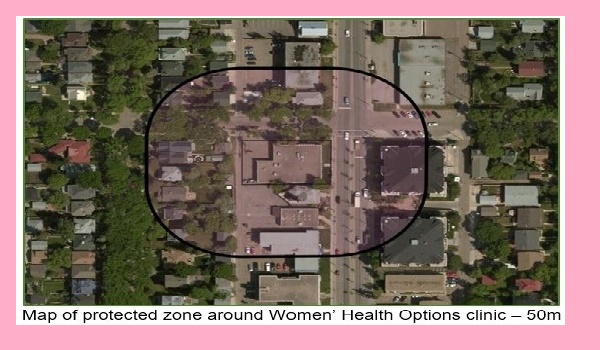 Legislation that would institute safe zones around abortion clinics would prevent patients from harassment, says Kim Cholewa, clinic manager of Woman’s Health Options, Edmonton’s only abortion clinic, which was established by abortion-rights advocate Dr Henry Morgentaler. “These last couple of years, it’s really escalated with the number of people, their aggressiveness, their lack of respect for our injunction, the harassment and intimidation of our patients,” she said.

> ban protesting, interfering with or intimidating a patient, physician or service provider within an access zone

> ban photographing, filming, or making any other audio or visual recording of a patient, physician or service provider who is within an access zone (without consent)

> ban publishing or distributing a photo, video or any other recording of a patient, physician or service provider who was within an access zone, in order to try to convince a person not to access or provide abortion services

>prohibit repeated communication by phone, mail or electronically (without consent) in order to try to convince a physician or service provider not to provide abortion services

> establish penalties for contravening the act for both individuals and corporations

The legislation would also outline behaviours that are prohibited such as harassing a physician’s neighbours or friends in hopes this unwanted behaviour would influence the physician to longer provide abortion services.

The bill had its second reading in the Alberta Legislative Assembly on 10 April, introduced eloquently by Health Minister Sarah Hoffman, opposed by one opposition party spokeswoman, then strongly supported by several other assembly members, all women. A clip of Marie Renaud, NDP member supporting the bill, and a video of the whole debate are cited below.

Health Minister Sarah Hoffman said: “Intimidation of patients is on the rise. This is not about freedom of speech. This is about deliberate targeting by intimidation, shame, harassment and bullying of women who are often vulnerable. That is completely unacceptable. Alberta women should have the right to access the care that’s right for them, including safe access to abortion services.”

Kim Cholewa said her clinic already has a court injunction to keep protesters away from the property. The injunction bars demonstrators from impeding patients and staff, and from picketing or distributing literature within a specific ‘bubble zone’ surrounding the clinic. It has been in place since 2002, but has become ineffective. “Women… cannot come into the building without being harassed and intimidated. Protesters show up outside the clinic a few times a week. They often violate the court order by trespassing onto clinic property or verbally abusing patients,” she said. There are no penalties for violating the injunction, which is one of its main weaknesses.

Women’s Health Options in Edmonton and the Kensington Clinic in Calgary handle about 75% of abortions in Alberta. Celia Posyniak, executive director of the Kensington Clinic, joined Hoffman at a government news conference Wednesday. Posyniak said the court order barring demonstrators from her facility has also become ineffective. She said protesters have been violating the rule that says they are to stay across the street and have been harassing patients with signs, verbal abuse and occasional attacks. She said the clinic had also been vandalised. She believes legislation will only be effective if there are consequences for law-breakers.

The Alberta bill says protesters must stay at least 50 metres away from the two abortion clinics, and makes it illegal for demonstrators to video, record audio or take pictures of people entering or leaving the building within the protection zone. It will also be illegal for anyone to harass a doctor by phone, mail or online to convince them to not provide abortion services.

Anyone breaking the law the first time would face a fine of up to $5,000 and/or 6 months in jail. Further offences could be fined up to $10,000 and/or one year in jail. Separate penalties for corporations are included because the distribution of images or recordings taken in the access zone might be carried out by a corporation. A corporation could be fined a maximum of $25,000 for a first offence, which would increase up to $100,000 for other offences. It is also possible to be prosecuted as an individual while acting for a corporation.

The province would also designate similar no-go zones around homes and offices of doctors and other staff who provide abortions if requested by them.

If the legislation passes, Alberta would join British Columbia, Ontario, Quebec, and Newfoundland and Labrador in creating safe zones to keep protesters away from patients.