A Catholic school in Woodstock, Ontario, St. Patrick Catholic Elementary School, was under fire because of an assignment for its Grade 8 students, which required them to make anti-abortion posters for marks and compete for the chance to win a cash prize in a local Right to Life Coalition contest.

The assignment involved students creating a poster that included the words “Unborn babies matter”, along with a picture or pictures that incorporate the theme. The assignments were to be graded and entered in the local contest. An anti-abortion contest has been part of the anti-abortion group’s offerings for the past 20 years, according to the group’s leader, but this is the first time a teacher made it into a school assignment.

Rachelle Lynn Dixon, whose daughter Kaylene, age 13, alerted her mother to the assignment, told the Canadian Broadcasting Corporation: “The parents weren’t told about it, and they’re not allowing the kids to learn about the opposite side of this issue. It’s a Catholic school, but it’s also funded by the public. It’s an elementary school that is asking kids to Google images about abortion. I want [my daughter] to form her own opinion. I understand it’s a Catholic school and it teaches Catholic beliefs, but we’re living in a day and age where women’s rights matter. With everything going on in the world, I don’t think these kids need to have this added on top of it.”

Dixon spoke to the school, and said she plans to pull her two children from the Catholic system at the end of the school year. She said it was problematic that the contest was being run by an outside group and that marks were being awarded alongside possible prize money. “It’s not the teacher, it’s not the school. It’s not even the church. It’s a competition through an outside group. If anything, this should have been a handout so if the kids want to participate, they can talk to their parents and do it on their own time,” she said.

Kaylene, Dixon’s 13-year-old daughter, made her own poster in response (below). She wrote in a speech: “I think it is OK to talk about abortion with kids, but what’s not OK is only teaching them about pro-life. I think instead of our current project, we should be allowed to make pro-choice posters and we should have a debate about the subject, as all opinions matter and everyone has the right to be heard.” 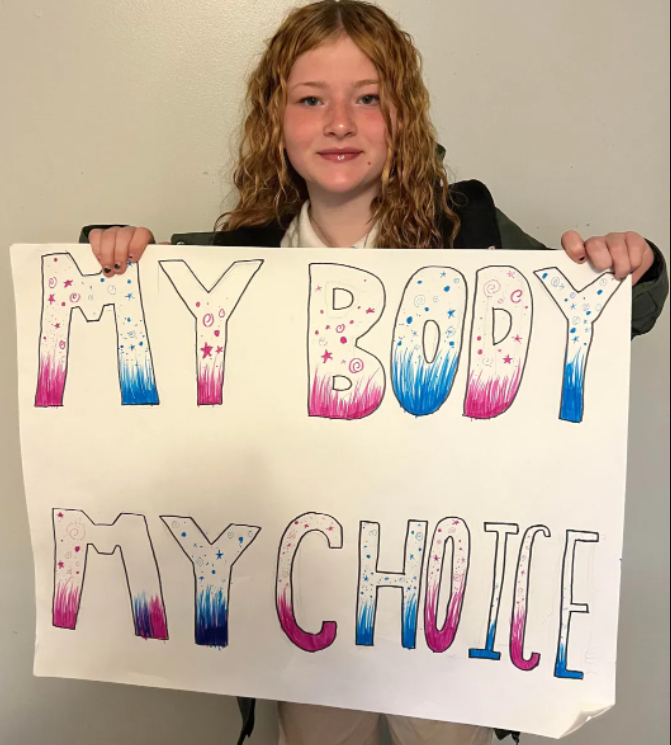