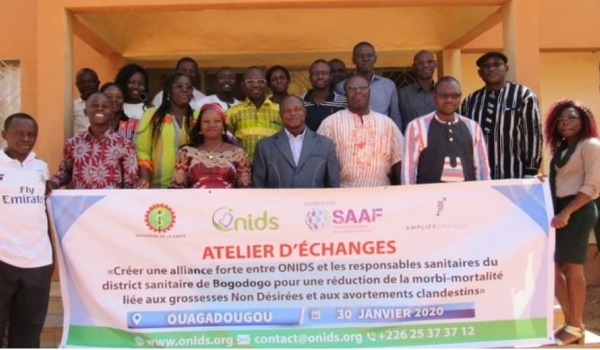 On 30 January 2020, l’Organisation pour les Nouvelles Initiatives en Développement et Santé (Organisation for New Initiatives in Development & Health, ONIDS), a youth organisation working with lawyers, held a workshop in collaboration with the Bogodogo Health District. The theme was achievements and perspectives on SRHR. It was attended by senior nurses of 16 Health and Social Promotion Centres (Centres de Santé et de Promotion Sociale/CSPS) from District 11, Ouagadougou, and the rural community of Saaba. The meeting was part of their advocacy activities on sexual and reproductive health and rights.

The workshop also aimed to create a strong alliance with CSPS officials and other health workers.

According to Cécile Thombiano, president of ONIDS, this meeting also aimed to share important messages, for example, the fact that a large number of young girls are still having difficulty managing their periods at school and the importance of legal abortion.

“With the help of health officials, we must lift the taboo and break the silence,” she said. “One of the reasons for this meeting was to interact with health officials in order to obtain their support in the fight against clandestine abortions and unwanted pregnancies, including support for encouraging the use of contraception to prevent unwanted pregnancy. Abortion is legal in cases of rape and incest in Burkina. Those who have been to school know that, but not young girls in the villages, who use unsafe methods that carry the risk of dying.”

The chief medical officer of the Bogodogo health district, Sibiri Kaboré, said he was “very satisfied” with the initiative and the workshop, and suggested that he was going to support ONIDS in all its activities. Cécile Thombiano concluded the event by saying: “No girl should miss school due to menstruation; no girl should die because of taboo health issues.”