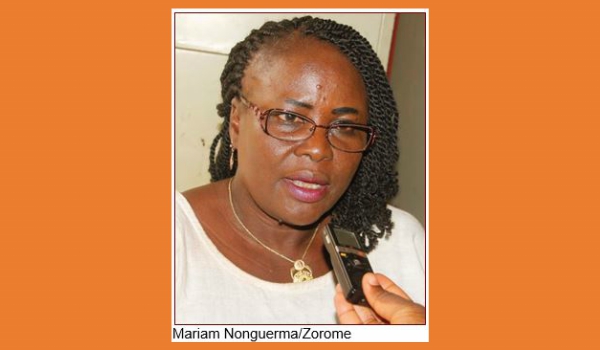 The extent of illegal abortion in Burkina is terrible because of the disastrous consequences of these abortions, including haemorrhage, sepsis, uterine perforation and even death. Sometimes girls come to our health centres from disastrous situations, bleeding. But when they present themselves, they do not confess that it is due to an induced abortion. And it is only following examination that one realises it was an abortion induced clandestinely. So, we do not distinguish between the different types of terminations, whether miscarriages or induced, but work to try to save the life of the woman and the child.

In Burkina Faso, the law allows us to terminate a pregnancy if it puts the life of the woman at risk. Sometimes the woman or girl has been raped and if she is pregnant and the rape can be proven, a team of doctors may agree to terminate the pregnancy. Abortion is also possible if the life of the child who will be born is not compatible with that of the mother. This is often the case if the child is severely malformed, especially in more than one way. Moreover, if a girl becomes pregnant by incest, in other words, if the perpetrator is her brother or father, the law allows abortion. These are the four reasons why the law allows us to do an abortion.

Letting people know this is the goal of the CAPSSR (Communauté d’Action pour la Promotion de la Santé Sexuelle et Reproductive) because the public does not know that safe, legal abortion is possible. Even women with the four types of pregnancies I’ve mentioned do not know that they can have an abortion, especially in cases of incest and rape. Victims prefer to commit suicide or give birth and give up their baby rather than talk about it, because they do not know that there is a law that protects them.

Legal abortions are done in hospitals, but there is screening that doctors will ask to do. Especially in cases of severe fetal malformations, ultrasound and other examinations are required. It’s the same thing for cases of rape; it is necessary that the signs of rape are confirmed by a doctor and that the police make inquiries. These abortions are mostly done in places where there are doctors, because a midwife in a Health & Social Services Centre (CSPS) cannot take the decision to do an abortion on her own. She must refer the girl or woman to a doctor, who will decide. Before free treatment for pregnant women and children under five years of age was introduced, a safe abortion kit cost 3,600 CFA francs (US$ 6.42). But it is now free.

It is our role to advocate and raise awareness so that public opinion is informed and that customary and religious leaders are also informed because they are unaware of the dangers and consequences of such pregnancies. So you need advocacy so that they will understand.

I am a provider at Yalgado Ouédraogo Hospital, and as a health worker in this hospital, I know women benefit from safe, legal abortion, especially in cases where the woman’s life was in danger. Women have been saved thanks to safe abortions.

At the moment, we are in the process of expanding advocacy and awareness, not to midwives but to doctors, who need to be informed, and judges, who are needed to prosecute rape. This means being aware of the girl or woman’s situation, providing accurate information and doing preliminary examinations to determine whether the pregnancy meets one of the four criteria. Moreover, a midwife can do the abortion with the permission of a doctor.

As regards our relationships with religious authorities, for the moment we intend to approach them and explain to them the need for safe, legal abortion and its benefits. I think they will understand. We may think it only happens to others, but when it happens to us, we realise the dangers, hence the clarification of values involved.

The difficulties are not lacking and it is not with the religious leaders only, but the whole population. The word ‘abortion’ itself, for some people, is already a crime. One of the difficulties we have is that people have not yet understood the value of induced abortion. This is why we need advocacy, sensitisation and information so that everyone understands that it is a law that exists in Burkina. Our fight is also to get the courts to reduce the length of investigations, especially with rape cases, which often prevents raped girls from benefiting from safe, legal abortion.

We intend, through our actions, to make the law on safe and legal abortion known to all. But before that, we recommend that women adopt contraceptive methods to prevent pregnancy. All in all, if one of the four cases of pregnancy requiring legal and safe abortion occurs, we ask for support so that the woman concerned is not a victim. Otherwise, it can be considered violence against women, while we want the protection of women and the community as a whole. It is the right of women not to be marginalised or rejected because they have been raped. So, we ask that the people be receptive to these pleas, so that the four types of abortion are understood and accepted by all. We ask the religious authorities and the entire population to support our pleas for lives to be saved.