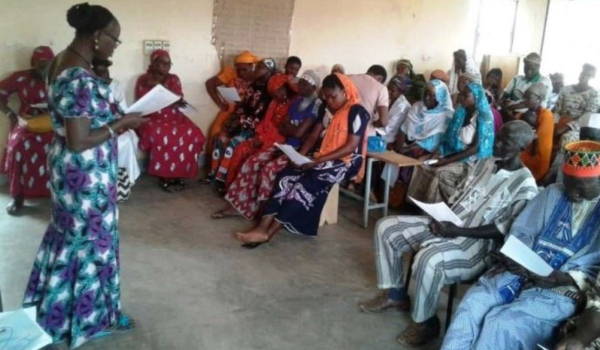 ABBEF believes that the socio-economic pressures surrounding abortion (e.g. stigma, shame, ignorance, fear) help to conceal the problem of unsafe abortion and that this is a major obstacle preventing women and girls from accessing services, abortion rights and post-abortion care.

According to Adissa Konaté of ABBEF, this series of exchanges was an opportunity to talk informally with participants and to highlight the reasons why a change in their views is important and how they could contribute to reducing mortality from unwanted pregnancies and clandestine abortions. The aims of the sessions were to inform participants about the extent of illegal abortion and the role of national laws related to abortion, and for them to gain an understanding of the effects of stigma and the services available for post-abortion care.

In Burkina Faso, 24-28% of maternal hospital deaths are related to unsafe abortion. This is partly due to the negative attitudes and lack of understanding on the part of some parents, who throw their daughters out of the home if they become pregnant. This situation leads to many girls committing infanticide or having illegal abortions, which often costs them their lives or permanent infertility. To prevent these disastrous consequences, Ms Konaté urged parents to change their behaviour, especially towards their daughters. She also invited parents to refer their daughters to the sexual and reproductive health centres for girls.

In 2008, the Comprehensive Management of Abortion Complications Project (PPCCA) was set up. “The need for this project is justified by the fact that abortion has such dramatic consequences and enormous complications affecting the health of girls and women in Burkina Faso,” said Ms Konaté. “Since 2014, we have begun to fight against the stigmatisation of young victims of unwanted pregnancies.” The discussions on abortion and unwanted pregnancies have been successful with all community actors as well as religious and traditional leaders, she said.

At the Royal Palace Wemteng-Naaba, the interventions of young people and of women, and certain notable dignitaries indicated that the information provided in the sessions had not fallen on deaf ears. The dignitary, Maneguede-Naaba, supported the words of the head of the youth listening centre at ABBEF in Ouagadougou: “We parents need to make time to talk with our children, to provide advice and especially to accompany them in case of pregnancy. I will not expel my daughter because of a pregnancy. On the contrary, I will accompany her wherever possible. Not doing this is what pushes some girls to see illegal abortions and die.” He welcomed the work of ABBEF, and called on them to expand their work to schools and in public spaces in order to reach more girls.

All in all, the participants recognised the responsibility and role that parents must play to better support child victims of unwanted pregnancies in order to avoid damage from unsafe abortions.
SOURCE/PHOTO: Avortements et grossesses non-désirées: L’autre regard des leaders communautaires,BS. Sidwaya, by Mamourou Benao, 24 April 2019 (en français)