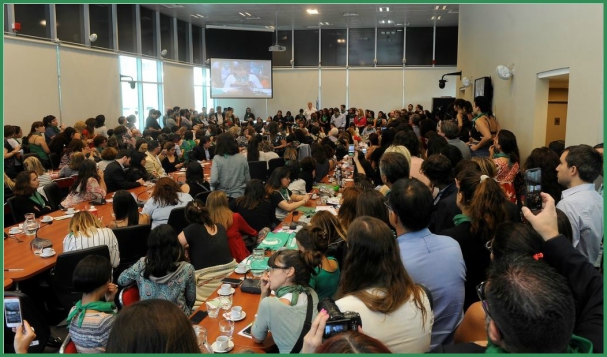 On 5 March at 17:50pm, the abortion bill of the Campaña Nacional por Aborto Legal, Seguro y Gratuito was tabled in the lower house of the Argentine Congress for the seventh time, but this time endorsed by 71 Deputies. Opening the press conference that day in the Members’ Annex, in a room overflowing with 200 supporters of the bill who were clapping and singing: “Legal abortion / in the hospital”, National Campaign chair Pamela Martín García said: “We wonder if this will be the last time this bill will have to be tabled before becoming law.”

“It is wonderful that the bill has been included on the parliamentary agenda. It is through the power of the feminist movement, women in action, and the appearance of the movement “Ni una menos” in the street,” said Marta Alanis of Catholics for the Right to Decide.

Victoria Donda, from Libres del Sud, was the first signatory of the bill to speak: “You have only two choices: to vote in favour of legal, safe and free abortion, or in favour of unsafe abortion. Last week Maria Campos, aged 37 years from Santiago del Estero, died from an unsafe abortion. It is the most recent case we know of.” According to estimates announced by Analía Crudo from the Red de Profesionales de la Salud por el Derecho a Decidir (Network of Health Professionals for the Right to Decide), since 1983, 3,030 women had died from complications of an unsafe abortion.

Carla Carrizo, from the Bloque Evolución, said: “As legislators we cannot represent ourselves or our personal beliefs only. We must put ourselves in the shoes of others, in this case all the women, adolescents and girls in Argentina.”

The Committee on General Legislation will lead the discussion of the bill. It must also go through the Family, Women, Children and Adolescents Committee, the Health Committee, and the Criminal Legislation Committee. By 20 March, they may be able to call a joint meeting of the four Committees.

The people are ahead of Congress in this debate, said Victoria Tesoriero, from the National Campaign. During the press conference, hundreds of demonstrators, most of them young women and adolescents, waited at the door of the Annex. “Legal abortion is a great debt we are owed by democracy” read one of the largest green banners that they held.

On 6 March, however, an opposing bill was tabled by 15 Deputies. This represents outright rejection of the decriminalisation of abortion and is entitled “Law for the comprehensive protection of the rights of pregnant women and girls and the right of girls and boys to be born”. The aim of this bill is to revise one of the clauses incorporated into the Constitution when it was reformed in 1994, in order to close down the possibility of legislating on abortion.

Although one media report apparently said that a referendum had been proposed as an alternative to law reform, this would not be possible because it is a matter of criminal law. The government can hold a public consultation, but even this suggestion generated many complaints; the women’s movement want legislators to do their job and have the debate.

As a contribution to an informed debate, three NGOs – REDAAS, CEDES and ELA – have circulated an informative report on abortion in figures. Data from 2005 show there were between 370,000 and 520,000 abortions annually in Argentina, and that there was more than one abortion for each live birth. In the three-year period 2014-2016, deaths from unsafe abortions were about 17% of all maternal deaths nationally, about 47 deaths per year. Unsafe abortion has been the most common cause of maternal deaths since 1980. Moreover, since the country returned to democracy, some 3,030 women have died from unsafe abortions – thus the debt of democracy.

As regards morbidity from unsafe abortions, some 49,000 women were admitted to public hospitals for complications of unsafe abortion in 2013, that is, 135 per day. Among them, two in ten were less than 19 years old, while three in ten were aged 20-24 years.