Home » News » BRAZIL – The case of the girl from Espirito Santo: Is this a new turning point in the long journey for abortion rights in Brazil? 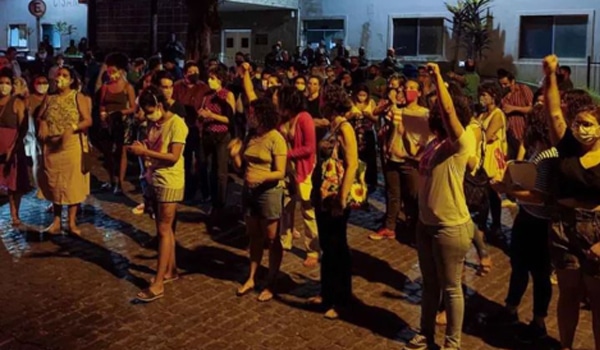 On 19 August 2020, we published a report of the case of a ten-year-old girl who had to travel halfway across Brazil to have a legal abortion and how the anti-abortion movement acted to try and prevent that abortion and how the forces of justice and supportive health professionals made sure the abortion took place and she got home safely. This week, Sonia Corrêa published a comprehensive report of what happened, and added new information of the aftermath of these events and the way in which the Bolsonaro government sought to place new restrictions on abortion, and how they were opposed. The following is an excerpt from the new section of this report:

“Since anti-abortion forces are unrelenting, the girl’s return to her home state was not the end of the story. As mentioned above, local judicial authorities and the CISAM medical staff who committed crimes and malpractice became the target of civil society organizations and legislators who announced they would be denounced to the national judiciary oversight committee and the Pernambuco medical regulatory body. Then, on August 29th, the Ministry of Health issued Ordinance N. 2882 on the Justification and Authorization of Procedures for Pregnancy Termination Permitted by Law. The instrument cancels the 2005 Ordinance regulating the Ministry of Health Protocol that guides legal abortion services. It requests doctors to compulsorily notify police authority in cases of rape attended by legal abortion services, thus abolishing the presumption of the truthfulness of the woman’s testimony. It also requires medical personnel to offer women and girls ultrasound screening to look at the embryo.

“The new ordinance is not merely a regulatory device: it is a weapon pointed by the Federal Executive at the right of women and girls to interrupt pregnancies resulting from rape. Its rules subject women, girls, and health professionals to unacceptable constraints, creating additional hindrances for rape-related abortion services, which are already precarious and limited. As doctor Helena Paro (who coordinates a legal abortion service in Minas Gerais) told O Globo, the new rules potentially convert clinics into police stations. Also, three other female OB/GYN practitioners severely criticized the Ordinance in an article published by newspaper Folha de São Paulo on September 6th, arguing that the norm, which compels women, albeit gently, to visualize the embryo, is sheer cruelty….

“The reaction was strong and quite immediate. Press and social media screamed loudly against this blunt top-down measure. In less than three days, two manifestos were sent to Congress and the Executive Branch repudiating the Ordinance. One of them was signed by more than 2,000 health professionals and the other by roughly 600 civil society organizations representing highly diverse sectors of Brazilian society. Then, on Wednesday, September 2nd, a legal petition interrogating the constitutionality of Ordinance N. 2882 was presented to the Supreme Court, signed by all political parties located on the left of the political spectrum (PCdoB, PDT, PSB, PSOL and PT). The Supreme Court will hear the lawsuit request for the immediate revocation of the Ordinance on September 25th.

“Members of these parties have also put forward four bills aimed at suspending the Ordinance. Parliamentarians from PSOL have presented a formal communication to the UN’s Special Rapporteurs regarding the infringements implied in the regulation. While this was occurring, the President of the House of Representatives also came forward to publicly criticize the Ordinance, declaring it to be unconstitutional. This firm reaction on the part of progressive and liberal voices in the political system against the Executive authoritarian move that restricts access to abortion is most welcome….

“As analyzed by feminist media outlet Gênero e Número, more than half of the 22 bills tabled in response to the case were initiated by extreme-right or center-right representatives. The large majority of them are devoted to amplifying criminal punishment of rapists, including three provisions proposing chemical castration (a policy agenda systematically supported by Bolsonaro’s political base). No provision has been made to address the prevention of sexual violence or the protection and expansion of existing abortion rights and clinics.

“Contrastingly, the sharp shift registered a week later in response to Ordinance N. 2882 was decidedly firm and positive. It is another relevant sign of the political re-energizing of pro-abortion rights politics, at least with regards to the solid defense of what is already enshrined in law….”