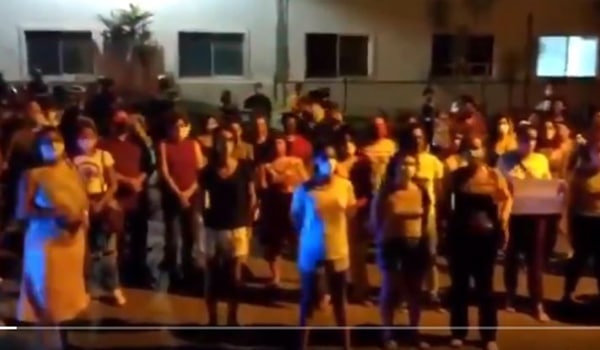 Every hour, four Brazilian girls under the age of 13 years are raped, according to the Brazilian Public Safety Yearbook, and most of these crimes are committed by a relative.

On 8 August 2020, the Brazilian press reported the case of a 10-year-old girl who became pregnant after being raped by her uncle who lived in the same house where she lives with her grandmother, in the municipality of São Mateus, in the north of the state of Espírito Santo. Taken to a local hospital, she said she had been sexually abused since she was 6 years old and had never told anyone because the uncle had threatened to kill her. The doctor established that she was about 20-22 weeks pregnant. Instead of writing a medical report and referring her to a hospital clinic that provides abortions for cases like hers, which is permitted by law (there are two such hospitals in the state), the doctor requested a judicial authorisation for the abortion (even though it is not required) and placed her in custody.

As soon as the case became public, the pastor Minister of Women, Family and Human Rights, known for her radical opposition to abortion – including in the case of rape – declared that the Ministry would help the girl and her family. Right afterwards, two high-level functionaries of the Ministry travelled to São Mateus.

Reacting to this declaration, Debora Diniz, anthropologist and Professor of Law at the University of Brasilia, who had to leave Brazil in 2018 due to threats against her life, said: “‘Help’ is not a legal category in a democracy that protects its citizens. What vulnerable people like this girl need are guarantees. This girl does not need ‘help’, she needs a legal and safe abortion. This case will be paradigmatic of the ideological use of abortion to elicit polarised and aggressive emotions and positions on what should simply be a matter of public health. In this specific case, there should be a criminal investigation of the aggressor and the health and dignity of this girl should be cared for and attended to.”

Because she was taken into custody, the girl’s “case” had to be decided in the local Juvenile Justice System. The prosecutor was told by both the girl and her grandmother, who is legally responsible for her, that they wanted the pregnancy terminated. Based on their wishes and existing legal norms, a judicial authorisation for an abortion was accordingly issued, and the State Health Department requested that she be transported to the capital city Vitoria for the abortion at the University Hospital (HUCAM), which had the technical expertise to carry it out.

After screening the girl, the HUCAM medical team declared that the abortion could not proceed because of the gestational age, however. They referred to a decision in a Ministry of Health 1999 Protocol, revised in 2012, that established 22 weeks as the upper time limit for abortion in cases of rape. However, as has been noted by various legal and medical experts, this limit contradicts the 1940 Penal Code, which does not set any upper limit on abortion following from rape. Nor does it take account of advances made possible by medical abortion.

Nevertheless, the State Health Department had to search for an alternative in other Brazilian states. She was accepted as a patient by the CISAM, a health unit in Recife, Pernambuco, one of the oldest and better-qualified legal abortion services in the country. The girl was duly taken to Pernambuco on 16 August. Up until then, the details of the case were protected under judicial secrecy. However, through channels that have not yet been identified, the girl’s personal details were leaked. Before she arrived in Recife, an anti-abortion activist had posted her name and where she was being taken on social media and called for the abortion to be stopped.

When she arrived at CISAM, a group of anti-abortion demonstrators, accompanied by state-level evangelical parliamentarians, were in front of the hospital, shouting that the director was a killer. You can watch them here. In contrast, feminist groups in Recife – the Forum de Mulheres de Pernambuco and Frente pela Legalização do Aborto – organised a vigil in front of the hospital in the girl’s support. You can watch them here. As reported by El País Brazil, despite security measures, the girl and her grandmother were harassed inside the hospital by two doctors (one male, one female), who managed to locate her even though they were not members of the hospital staff.

Despite these barriers and harassment, the abortion took place and the girl is doing well.

However, this situation is not yet over. In São Mateus, the girl’s family have been harassed by ‘religious’ activists. Moreover, since last week, there have been virulent verbal attacks against and pressures put on all the authorities and medical personnel involved in the case. The priority for the women’s movement at this time is to support the legal authorities politically and the medical institution and team who steadfastly complied with the law to ensure the human rights of this child from São Mateus.

As these events evolved, feminist movements were strongly mobilised across Brazil. A petition launched by the collective Sangria Coletiva, calling for the rights of women to be fully respected, gathered 680,000 signatures. The leak of information about the girl was widely denounced and after a digital campaign, all the social media sites reporting it were taken down. Moreover, in response to a legal challenge taken by the public defenders in Espírito Santo, the court ruled that all digital platforms must delete any and all personal information about the girl and her family, and any legal and medical documents related to the case.