Home » News » BRAZIL – ‘For the lives of our mothers’: a call to support paid leave for domestic workers during Covid-19 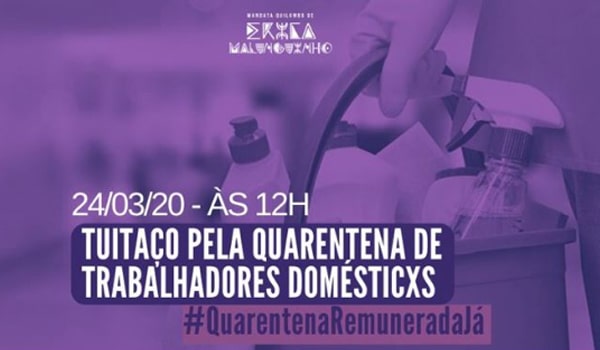 The poster says: “Faced with the spread of Covid-19, we call on everyone to mobilise their networks this Tuesday (24 March), tweeting from 12 noon! There is an urgent need for domestic workers to get paid leave from work! Do you support this cause?” #QuarantineRemuneration

Brazil has over 7 million domestic workers. Women like 57-year-old Caterina make four-hour roundtrip bus rides every weekday from a working-class area outside Rio de Janeiro to the city’s well-off South Zone to do domestic work. When Covid-19 arrived, her daughter begged her to stay home. Millions of domestic workers were told to keep working or be laid off without pay, however. Now their families are fighting back. Caterina’s daughter França rallied the sons and daughters of other maids to launch the campaign “For the lives of our mothers”, with a manifesto calling for guaranteed protection for the health and jobs of the country’s domestic workers during the pandemic.

Theirpetition, demanding that all of Brazil’s domestic workers – mainly poor, mostly black women – be granted immediate “paid quarantine”, had gathered more than 87,000 signatures by 5 May and touched a nerve in a country where the working arrangements are often seen as a legacy of slavery and a reflection of deep inequality. A furious debate about class and privilege was also taking place after a 63-year-old housekeeperbecame the first person in Rio de Janeiro to die of Covid-19, which she is believed to have caught from her employer, who had reportedly just returned from a holiday in Italy.

The government recommended that employers put domestic workers on paid leave from all but “indispensable” services. A provisionallawwas introduced, allowing employers to reduce maids’ hours and suspend their contracts for up to 60 days, with an emergency fund to cover loss of income. However, as the national union of domestic workers (Fenetrad) stressed: “Domestic workers are among those most exposed to Covid-19. They use public transport, are in regular contact with others… They earn on average less than the minimum wage, and only around 30% have a formal contract, leaving them exposed to abuse and violation of their rights.”