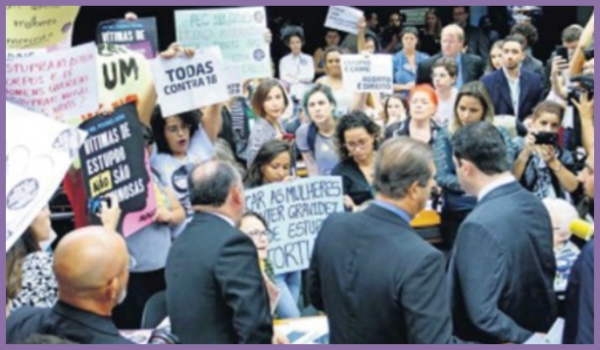 Amendment No.181, a provision to include protection of life from conception to the text of the Constitution of Brazil, was approved by the Special Commission of the Chamber of Deputies on 8 November. It would criminalize abortion under all circumstances. Since it was passed by 18 men to 1 woman, the mobilization against the measure has been intense. A few days ago, the President of the Chamber of Deputies, Rodrigo Maia, declared the amendment would not pass in the Congress. An article in Folha de São Paulo argued that the President intends to keep spirits appeased inside the Chamber, due to his hopes of being re-elected in 2018. Debating abortion could create negative consequences for him. On the other hand, Maia is from a conservative party and has joined with religious groups inside the Chamber many times, under the pro-family/pro-life flags. The stakes are high and even with his strategy of stalling the processing of the amendment, the scenario is frightening and his position remains ambiguous.

Very shortly after the Commission’s vote, the newspaper Folha de São Paulo, instead of opposing the measure as regressive, published an editorial proposing to hold a referendum – to resolve the matter via public opinion, thus ignoring the right to abortion as a human rights issue and giving it the status of something that has to pass popular scrutiny. If there were to be a referendum, the odds would not be in favour of women, as the capacity to mobilise public opinion is much greater for conservative religious sectors, who own TV and radio channels and who receive generous international funding and resources in Brazil.

Subsequently, however, members of the Congress have been overwhelmed by a stream of public statements and opinion pieces in the main news and media channels, depicting this measure as absurd. The solidarity letter of the Special Meeting of the Presiding Officers of the Regional Conference on Population and Development in Latin America and the Caribbean, held in Santiago, Chile on 9 November 2017 garnered 341 signatures by 18 November.

Then a Joint Note by UN agencies – UNFPA, UN Women, Pan American Health Organization (WHO) and the OHCHR Regional Office for South America – was published on 20 November. It expressed grave concern that the measure, if passed, would create a great risk to the health and lives of women and girls.

The feminist movement has been leading the debate, as political pressure is paramount and it has been expressed and supported on many different fronts: social media, newspapers, the streets, press releases, and more. There were rallies in 24 cities in the country on 13 November, including as many as 7-10,000 people in São Paulo alone. In addition, Amnesty International was able to gather 40,000 signatures in a call to action and Avaaz, with its first petition related to abortion, obtained over 100,000 signatures. This is all the fruit of joint organizing and resistance by progressive sectors of civil society, gathered together in the Frente Nacional Contra a Criminalização das Mulheres e pela Legalização do Aborto (National Front against the Criminalization of Women and for the Legalization of Abortion), who lobbied extensively with parliamentarians in order to bring all our reasons why this amendment must not pass into the public debate.

On 21 November, another demonstration took place in Brasilia, the day the Special Commission was due to start reviewing amendments to the amendment banning abortion. Without hesitation, women went into the streets once more (photos) and reached out to allies and potential allies in both houses of the Congress, as well as its President. Our Congressional allies started to pay more attention and said they would attend the Special Commission in order to dispute the terms of the amendment. This signaled to the Special Commission that this amendment must be discussed thoroughly and cannot be decided by an empty Chamber. The review was postponed until 22 November, and the Commission is expected to return to debating the amendment next week. In the meantime, we will seek to mobilize in the context of the International Days against Violence against Women around 25 November. In a desperate counter-measure, a Republican Party congressman tabled four proposals to curtail feminist advances and to increase the penalty for all parties involved in an abortion procedure. Meanwhile, the feminist movement has been targeted by far-right conservative and religious sectors on social media, but this is not new.

Abortion is a subject at the centre of the tension between conservative and progressive sectors. With the rise in the number of seats occupied by religious legislators, it has become a minefield, widening the terms of the dispute from abortion to embrace any subject related to discrimination and gender equality, such as confessional religious education, and attempts to prohibit discussion of gender identity in schools and elsewhere by evoking “family values” as the basis of opposition.

The risk is that although ideologically the progressive parties agree with and support the right to abortion, the electoral situation may jeopardize their rightist alliances, which are part of their voter base. Further, the rightist parties are being contacted by the right to try to find ways to reach and influence the House President Maia. He is key in the upcoming progress of the amendment as soon as it leaves the Special Commission. While he has declared the amendment will not pass, he is also inclined to the right as he and his party have joined forces with the most religious sectors.

Thanks from the movement in Brazil to everyone who signed the solidarity letter and the petitions! We received 390 signatures, which were sent to allied congressmen and to the Frente Nacional Contra a Criminalização das Mulheres e pela Legalização do Aborto (National Front against the Criminalization of Women and for the Legalization of Abortion).