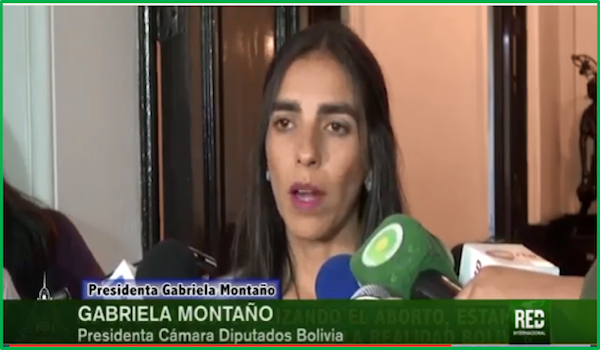 Abortion is currently illegal in Bolivia except in cases of rape, incest and risk to the woman’s health. Until recently, these abortions had to be approved by a judge. Clandestine abortions are therefore common. The Women’s Hospital of La Paz reported that in 2015, 10 women a day were admitted in a critical state as a result of unsafe abortions. The government party, el Movimiento al Socialismo, introduced the bill in March this year, and is promoting the amendments in response to the effects of poverty on women with unwanted pregnancies, who cannot afford safe illegal abortions. Gabriela Montaño, President of the Cámara Diputados, shown above discussing the bill in a YouTube video, is supporting the changes.

A revised article in the Penal Code has already been approved by the Constitutional Committee of the lower house of the congress that would also allow abortion in the first eight weeks of pregnancy without penalty if she lives on the street or in extreme poverty, if she does not have the resources to support herself or her family, already has dependents she cannot support, or is a student. It would also allow abortion in cases of fatal fetal anomaly and for a child or adolescent girl.

The lower house is expected to debate the bill in the coming weeks. If passed, it would then go to the upper house, which they hope will be before the August recess.

This bill is seen as an important step by women’s rights advocates, but it would still exclude many abortions. Tania Nava, director of Catholics for the Right to Decide in Bolivia, believes the additional clauses will all be accepted. They, Ipas Bolivia and other women’s rights groups are arguing for this to become a step towards eventual decriminalisation.