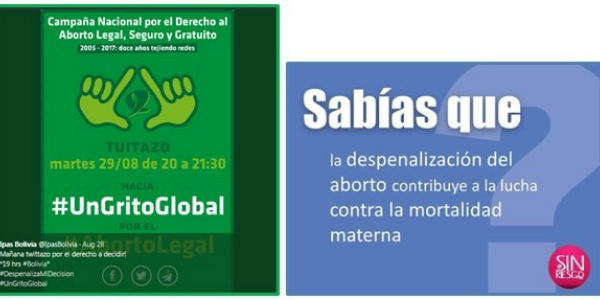 In August seven women accused of abortion in five cities were arrested, compared to two cases in the past seven months. Five other people were also arrested as accomplices. Doctors, who filed the complaints in the majority of cases said they were complying with the law in order to avoid being seen as accomplices. But they are also failing to respect the confidentiality of their patients and stop women with abortion complications seeking care, said Guadelupe Pérez on behalf of the Pacto de Despenalización del Aborto.

The Bolivian Criminal Code punishes abortion with up to six years in prison, except in cases of rape, incest or where the woman’s life is in danger. The draft bill to amend the Code, still under discussion, extends the grounds of legal abortion during the first eight weeks if the woman is in extreme poverty, does not have the resources to support her family, or is a student. Since it was tabled, the anti-abortion movement has called several large protests throughout the country, which may have sparked more women to be denounced.

Until last year, although there were some 775 arrests, according to Ipas Bolivia, only two women went to prison for having abortions. One, who was 23 weeks pregnant when she  caused an abortion, spent eight months in prison in 2012 and the other one, only three days in 2016.

On 2 August, “Lizbeth B” was hospitalised for complications of abortion with pills that caused her to haemorrhage. She is 28 years old and a mother of two children, ages 1 and 2 years. She was treated while in police custody. Her husband admitted that he had pressured her to have an abortion for economic reasons. He was also arrested, accused of complicity.

On 4 August, “Reyna C”, aged 20 years, was arrested along with her boyfriend, accused of having an abortion with pills in a motel room. On 16 August, in a third city, a young woman aged 21 years was apprehended in a  clinic that provided abortions. According to the doctors who denounced her, there was abortion medication in her system.

On 20 August, a woman was denounced by doctors for an abortion at five months of pregnancy. She required an emergency curettage and was then taken into police custody and arrested, along with her husband. On the 21 August, the police apprehended a teenager aged 16 years, who was denounced by staff of La Paz Hospital, where she went with serious haemorrhage and said the decision was because her parents rejected her pregnancy. She was accused for causing a risk to her own life by using abortion pills.

These cases were made public through the media, but the Pacto de Despenalización del Aborto knows of two other arrests in Cochabamba and Santa Cruz, one of whom was handcuffed to her hospital bed.

Abortion is the third leading cause of maternal mortality in Bolivia. The most recent death was a woman who was 33 years old, who died at home as a result of an abortion with pills purchased in a pharmacy and herbs purchased elsewhere. She left three children aged 4, 12 and 15 years. She was about four months pregnant.