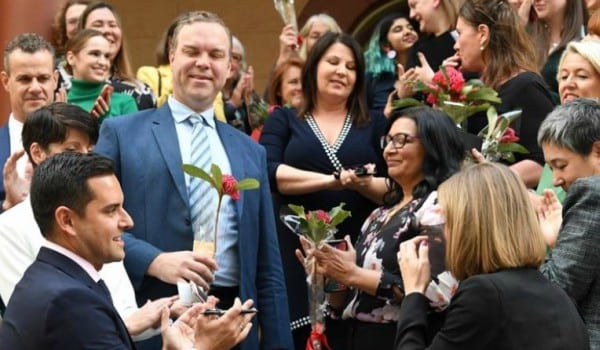 There were emotional scenes in parliament as abortion was decriminalised in NSW.

The New South Wales parliament has passed a law decriminalising abortion more than a century after it was included in the state’s criminal code. Overnight, the Upper House finally passed the bill and the next morning the Lower House approved its amendments. The state’s Premier Gladys Berejiklian was nowhere to be seen in the chamber when it happened, but said she would have been there to cast a vote if a division had been called. In fact, the bill was passed on a voice vote. “I had full confidence that the house would resolve it in a positive way,” she said. She did manage to go to a sports event instead.

The bill exposed deep divisions within the state Liberal Party. Liberal MP Tanya Davies even plotted a leadership coup against the Premier the week before, but later backed down.

There was applause in the lower house as the Abortion Law Reform Act 2019 passed its final hurdle following a marathon debate on over 100 anti-abortion amendments and weeks of anti-abortion protest. On social media, thousands reacted to the news and independent MP Alex Greenwich, who tabled the bill, even apologised that it took so long to push through. Labor MP Penny Sharpe, one of 15 co-sponsors of the bill, said the vote was 119 years in the making. Green MP Mehreen Faruqi, a long-time supporter of law reform, tweeted: “It’s happened! NSW has finally decriminalised abortion.” #nswpol #auspol #end12 #VoteProChoiceNSW

The bill decriminalises abortion and allows terminations up to 22 weeks at the woman’s request and later abortions if two doctors agree. It replaces a law from 1900 that had left women and their doctors at risk of prosecution and a prison term of up to 10 years if an abortion was deemed unlawful. What a difference!