Home » News » ARGENTINA – Today’s the day: a matter of life and death for women 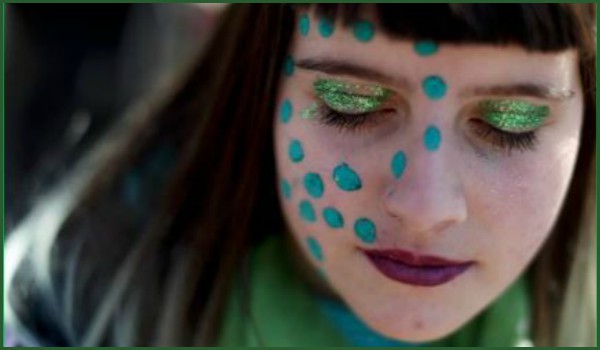 It’s the 8th of August, 10am, the day the vote will be taken on the bill that was passed by the House of Deputies several months and thousands of words and actions in support of law reform ago. Our friends in the country told us on the 1st of August that the debate in the Senate over the past days and weeks has been far more aggressive and extreme, mostly because anti-abortion activists are more active and preparing to go to court if the bill is approved. Some are pushing for the rejection of the bill altogether. Others have proposed a number of amendments.

An article on ABC News on 1 August, reporting on the response of the medical profession to the bill, quoted Health Minister Adolfo Rubinstein as saying recently. “Beyond all the moral dilemmas, abortion exists and it’s a problem that we must face.” They also reported that the prestigious Argentina Medical Society have endorsed the bill “because it will reduce deaths among the estimated 400,000–500,000 women who now have clandestine abortions each year”. Only a “small fraction” of the country’s physicians are anti-abortion, but those who are are speaking out, following the Catholic church’s position. It is ironic that even doctors can talk about “supporting life” when it’s about embryos, while never acknowledging the public health reality, that some 50,000 women each year seek hospital treatment for complications of unsafe abortions and that women’s health and lives are being damaged and lost due to unsafe, illegal abortions.

Most ironic of all, however, is the complaint by the Federation of Gynecology and Obstetrics Societies who expressed concern that doctors who refuse to perform abortions on moral grounds might suffer professional discrimination. They note that “objectors” would have to register, which might function as a sort of “black list” for hospitals to avoid hiring them. But why should hospitals hire someone who has stated from the outset that they will not do the job? And why would that person want to apply?

That was one week ago. Yesterday, 7 August, Mariela Belski, executive director of Amnesty International Argentina, wrote in the Irish Times: “A very welcome bill will soon come before the Oireachtas in Ireland, effecting a transformation of Ireland’s provision of abortion services. A very important bill is also before the Argentinian Senate right now, proposing to decriminalise abortion up to 14 weeks of pregnancy and thereby guarantee access to safe abortion services. We in Amnesty International Argentina are calling for the Senate to vote for its adoption. There are many similarities between our two countries in the context of abortion. Therefore, we are heartened that a group of 60 Irish parliamentarians from both Seanad Éireann and Dáil Éireann, across almost all political parties and groups, have signed a letter to the Argentinian senators urging a vote in favour of the Bill…” The title of her article: “Argentina’s abortion debate mirrors Ireland in every respect bar one: Unable to travel from Argentina for an abortion, 3,000 women have died since 1983.”

Today, El País reports: “Argentina votes on the legalisation of abortion amidst a massive mobilisation”. Yes, as expected, thousands upon thousands of people, the majority of them women, are in the streets again, surrounding the Senate building, and will remain until the vote. The report continues: “So far, 37 senators have expressed their intention to vote against the bill; 31 are in favour, although some have asked for amendments; two remain uncertain, one says they will abstain and one says they will be absent.” But the debate is just starting, and the vote in the Deputies was not what was predicted at the outset either.

Let’s give Alejandro Álvarez, canon law expert of Voces Católicas, the next to last word. When asked if Catholic parliamentarians who have voted to approve the bill on abortion will be automatically excommunicated, as anyone who is directly involved in providing or seeking an abortion would be, he said: “Even though their conduct is very serious, their performance does not necessarily result in the commission of an abortion, there is no direct cause and effect relationship. Therefore, it must be understood that he [sic] does not commit the crime of abortion.”

Actualidad.rt says there are three options in front of the Senate today:

If this third alternative is passed, the bill must return to the Deputies, where the amended bill must either be approved (which needs a simple majority) or the original text they had sent to the Senate reinstated (which needs a majority equal to or greater than the vote in the Senate).

The debate has been going on and on and on and on since 9:30am. When the vote finally arrives, some time later tonight, when all 72 Senators have had the opportunity to have their say, women will win, or we will not win – or not this time. But this issue is in the public policy space, across the world women have been inspired to act, and this will not go away. The need for safe abortion will not go away, and women will not accept the denial of our rights – the right to life, health, and autonomy over our own bodies and lives.

El País points out that in the last national elections campaigns, only the left included the legalisation of abortion in its programme. Looking ahead to 2019, if abortion is still a crime, they say, all candidates will have to position themselves on this subject.

They will also have to deal with the response from the mass of women in Argentina who support law reform, starting in the street tonight and every day thereafter, from the minute the vote is announced. We can only hope the Senators have been going outside to mingle with the crowds during the breaks they have taken today, so that they get a small taste of what that will mean.

Solidarity actions have been announced in 15 countries in Latin America/Caribbean, 14 countries in Europe (including 12 cities in Spain alone), 4 countries in Asia-Pacific, and 2 in North America. The following advertisement was carried on the New York Times back cover on 7 August, posted by Amnesty International, whose new abortion policy is already being implemented brilliantly: 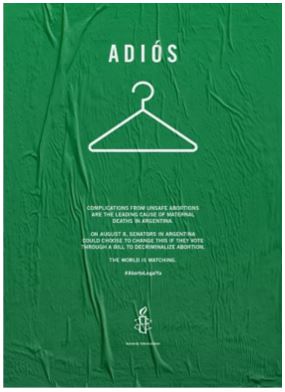 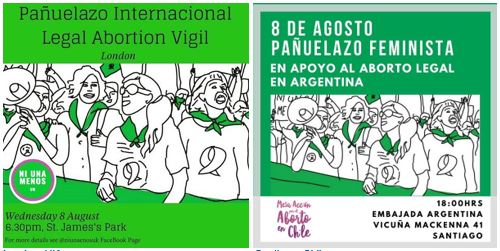 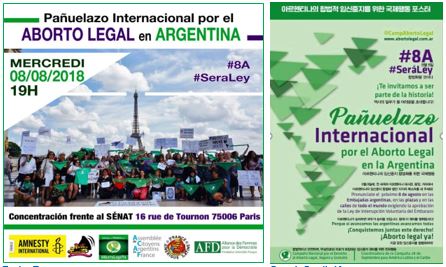 Events were planned the following cities (with FB links or details when we could find them):