This is the ninth time that an abortion law reform bill has been debated in the Argentinian Congress. Unlike the previous bills, this initiative was tabled  in the Argentinian Congress. Unlike the previous bills, the initiative was tabled by the Government at the direction of the President, Alberto Fernández. Much of the language in this bill is similar to the bill written two years ago by supporters of legal abortion, but with some differences. They also negotiated some last-minute additions to the current text in the past few days, aware of the close vote that is coming. The debate is due to start on 10 December around noon in the Chamber of Deputies; it is expected to go on at least into the night and finish early in the morning of 11 December. It will then move to the Senate, where the previous bill was defeated by only a few votes.

Criminalisation of abortion in the current law is being challenged. According to an investigation by the Centro de Estudios Legales y Sociales (Center for Legal and Social Studies) and the University of San Martín, at least 73 women have been prosecuted for abortions or other obstetric events since 2012.

The best known case was of a woman known as Belén, who was imprisoned for 29 months for a spontaneous abortion in Tucumán, in the north of the country, in 2014. Another is Gimena, 26 years old and a mother of two children, who since 2016 has been detained in a prison in Salta. Among the evidence used to convict her was that she had searched the internet for how to do a home abortion. Patricia, a mother of two daughters, died in 2019, at the age of 40, in the prison where she had been held since 2015, convicted of having had an abortion at five months of pregnancy and disposing of the fetus in a field.

The vote was scheduled to take place at 6am Argentina time, but it is 6:30am as I write this, and the debate is not yet over. Pagina 12 is reporting statements by Deputies almost minute by minute…

The months of debate in the Congress and years of mobilisation in the streets in favour and against legal abortion may have revealed the polarisation on this issue within Argentinian society, but abortion has nevertheless ceased to be the taboo it used to be. Hundreds of women have made their abortions public in recent days, among them Deputy Cecilia Moreau, who served as the President of the Plenary of Commissions that approved the wording of the bill. Página 12 reports that she moved her peers by sharing her experience of going through a clandestine abortion at the age of 16, during a televised debate on abortion last week, shown on her Twitter feed. Whatever happens, it is said, this issue is out in the open and will stay that way.

Deputy Blanca Osuna is in hospital with Covid-19, but she participated in the debate from there, although it was assumed that she was going to be absent from the session. She said she feels: “pride of being able to participate in this debate. My congratulations to those who are mobilizing for this, which implies progress and a better Argentina. Let it be law, for my granddaughters, for my daughters, for the girls who are going to come.” When she finished speaking there was warm applause across the Chamber.

Deputy Gisela Scaglia said: “We are trying to transform a crime into a right.” For those who are anti-abortion, it remains a crime. Their words are harsh and condemnatory; a few already promise they will work to repeal the law if it is passed.

From video footage on DTV Live at 5:30am on 11 December, the plaza outside the Congress building is packed with people from all sides of the debate, waiting… and waiting… 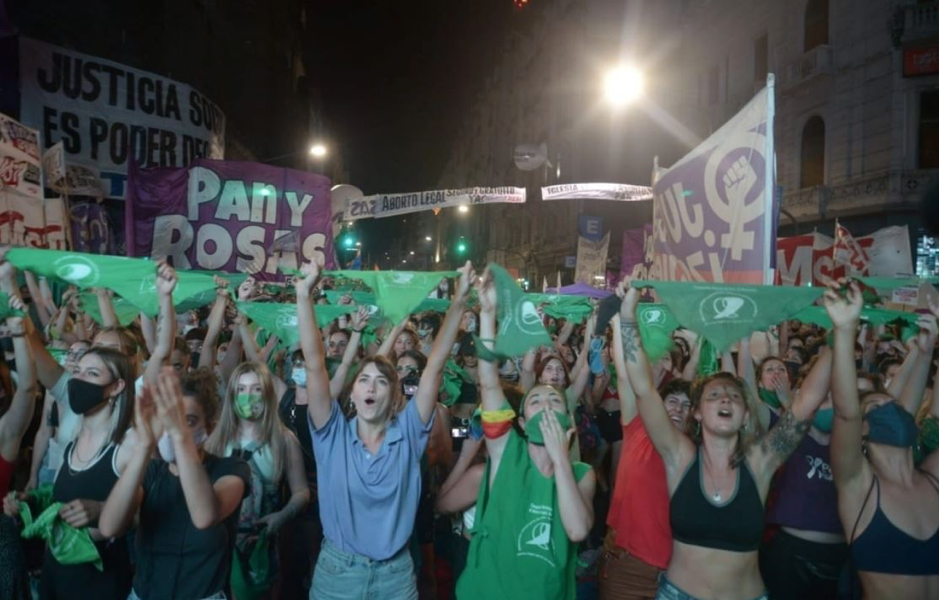 7am the speeches continue. The President of the Chamber has maintained a calm tone and good humour throughout. Summing up has begun. Voting began at 7:20am and took only a few minutes: 131 for law reform, 117 against, 6 abstentions. We won!!! Heartfelt congratulations to all who worked so hard for this. Now to the Senate.