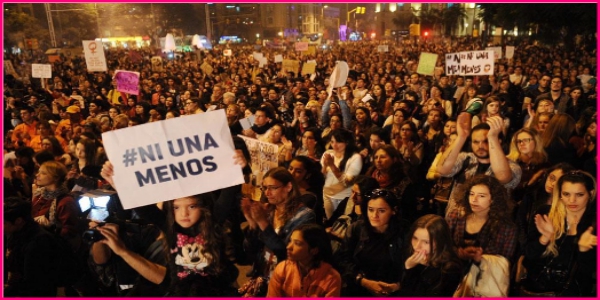 #NiUnaMenos (translated as #NotOneLess in English) is a national movement in Argentina that protests against the murder of women, often by their partners or ex-partners, as an issue of gender-based violence and misogyny.

Estaban Bullrich, a former minister in Argentina’s governing party, has sparked anger by comparing the abortion of a female fetus to these murders. Presumably seeking publicity because he is running for public office, he claimed in a radio interview that he believed: “the state has to prevent unwanted pregnancies with sexuality education and by providing women with contraception”. However, while he was education minister, Bullrich implemented massive budget cuts to the National Programme of Comprehensive Sexuality Education, as well as to teacher training programmes. Moreover, under President Macri’s government, the price of a box of 16 misoprostol tablets in Argentina has risen 300% from over US$40 in November 2015 to US$170 in 2017, according to a report by CELS, Lesbianas y Feministas por la Descriminalización del Aborto y Frente de Mujeres.

In a response addressed personally to Bullrich in Página 12, Mariana Carbajal from the #NiUnaMenos movement. Her response ends: “You, as a male, Bullrich, can never know what a woman facing an unwanted pregnancy feels. Perhaps, you will be able to say whether or not you want your partner to continue her pregnancy, but you will never experience in your own body what it means to be obliged to carry to term a pregnancy that you do not want – because it was the product of sexual abuse or rape, because the contraceptive method failed, because your partner had desired it but the circumstances changed, because you were just fired from your job, because you have other plans. These situations occur daily in women’s lives… The decriminalisation of abortion is a demand of the movement, nothing less… Without legal abortion, Bullich, there is not #NiUnaMenos.”