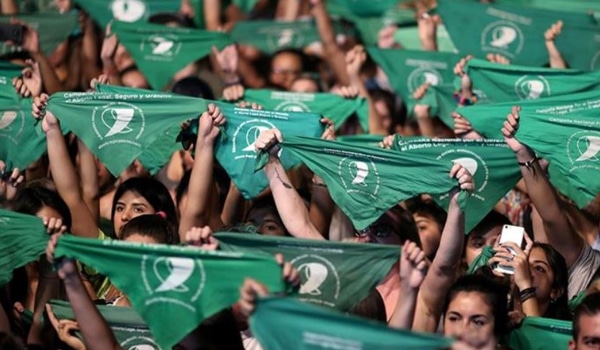 Argentina’s president,Alberto Fernández, said on 1 March 2020 that he intends to send a legalabortion bill to Congress in the next ten days. Everyone is awaiting the textof the bill with both anticipation and anxiety. In 2018 the abortion bill thatwas passed in the lower house but rejected by only a few votes in the upperhouse was supported by the country’s Health Minister. The bill this year, forthe first time, is not only being supported but tabled by the country’spresident. Fernandez said the current law has “condemned many women, generally of limited resources, to resort toabortive practices in absolute secrecy, putting their health and sometimestheir lives at risk.” An estimated 350,000-500,000 illegal abortions take placein the country each year.

Fernández said:“A state must protect its citizens in general and women in particular. And inthe 21st century, every society needs to respect an individual’s decision tomake choices over their own bodies.”He will also send a proposal toCongress to provide better support to mothers and newborns, as well as a planto ensure sexuality education is delivered in schools.

Daniel Lipovetsky, a legislator in the province of Buenos Aires from thepolitical opposition, who in 2018 was part of the group who supportedlegalisation, told Al Jazeera that Fernández’s announcement showed how far Argentina had moved ahead on the issue. “Justa few years ago, it would have been unimaginable that a president would send abill to legalise abortion to the Congress,” he said.

Ana Correa, a women’s rights activist whowrote Somos Belen,a book about an Argentine woman who was imprisonedafter suffering a miscarriage, and one of the founders of Ni Una Menos,highlighted three cases that have served to show the truth of abortion inArgentina: Belen, who spent more than two years in prison after a court ruledthat what doctors had diagnosed as a miscarriage was an abortion (herconviction was overturned in 2017 following a public outcry); Ana MariaAcevedo, who sought an abortion in 2007 in order to undergo chemotherapy, wasrefused and died; and Lucia, aged 11, who was raped by her grandmother’spartner and denied a legal abortion by health authorities in 2019, until acourt finally intervened. An emergency caesarean section had to be performed,the baby did not survive, and the doctors were then accused of homicide. Noindictments were filed.

She said Fernandez’s plan to providesupport to new mothers also serves “to deconstruct the false notion that thosewho are in favour of legal abortion are against maternity.”

As with the previous bill, the lower house of Congress is likely to support the new bill. The upper house remains less sure. But the feminist movement plans to stay in the streets to keep the pressure on until they win.