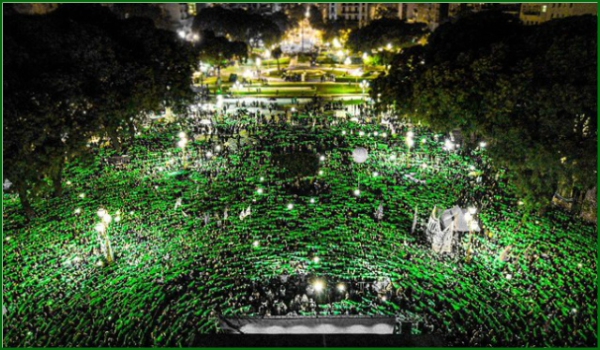 The photograph is from Buenos Aires, taken from a helicopter above the national congress building of the #NiUnaMenos demonstration. #NiUnaMenos was started on 3 June 2017 after yet another adolescent girl was killed by her boyfriend. Now it is closely linked to the abortion rights campaign. There were some 160,000 people on the demonstration, all holding up the green scarf of the national campaign for safe, legal, free abortion.

The weeks of statements to the congressional commission have now finished. There were in total 724 experts who gave testimony over a period of 122 hours. The debate in the lower house of the congress is scheduled for 13 June. There are currently 8 different bills that have been tabled. Negotiations to combine at least some of them to make a consensus more possible, are ongoing. Cautious hope is being expressed by the movement. No date has been set for consideration of the bill, if it passes, in the upper house at this stage.