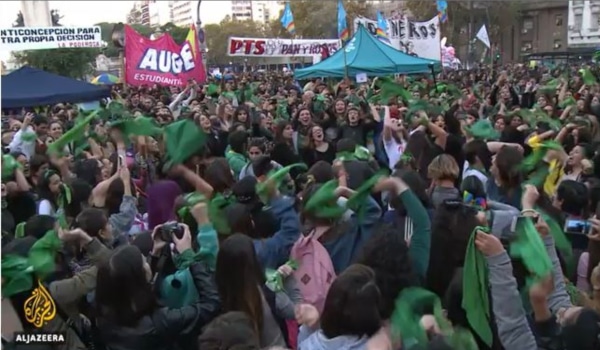 On 28 May 2019, the International Day of Action for Women’s Health, thousands of abortion rights advocates marched in Buenos Aires and in more than 100 cities across the country as the Campaña Nacional por el Derecho al Aborto Legal, Seguro y Gratuito (National Campaign for the Right to Legal, Safe and Free Abortion) tabled a new abortion bill, similar to last year’s, in the Congress. The new bill calls for access to legal, safe, publicly funded abortions in the first 14 weeks of a pregnancy. It also seeks to decriminalise abortion and does not allow for a medical practitioner to declare a conscientious objection to the process. A press conference inside the Congress Building was transmitted live to the crowds in front of the Building via an internet connection.

Al-Jazeera writes: “Rosana Fanjul, a member of the legalisation campaign, and the granddaughter of Dora Koladesky, one of the pioneers of the movement, said the fight is in her blood.She told Al Jazeera the abortion debate is the axis on which all sorts of issues regarding women turn in Argentina. We’ve started questioning a lot of things, like abuse, how women are treated generally, our lack of representation in different areas of leadership. The question of equality has opened up in all sorts of arenas that have nothing to do with abortion,” Fanjul said. Although she doesn’t think the political will is there this year to approve the bill, because it is an election year, she believes Argentina’s leaders know legalisation is inevitable. “The new generation have already assumed this as one of their rights, and they know that if it’s not this year, it will be the next one or the next,” she said. “They can’t delay this.”