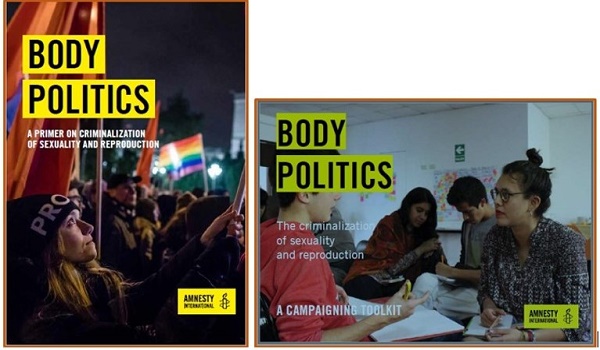 On 12 March 2018 at the Commission on the Status of Women, Amnesty International launched two reports, a primer and a toolkit, in the series on Body Politics: Criminalization of Sexuality and Reproduction. The series focuses on the human rights impact of criminalizing abortion, sex work, sex outside of marriage, adolescent sexuality, HIV exposure, non-disclosure and transmission, same-sex sexual conduct and pregnancy. It provides both critical analysis and tools for advocacy planning. Training materials will be published soon. This work is the culmination of six years of research, analysis and engagement with key partners.

In the Foreword to the Primer, Anand Grover, Former Special Rapporteur on the right to health, a senior advocate and a founder-member of the Lawyers Collective in India, wrote:

“In addition to implicating human rights adversely, criminalization of sexuality and reproductive decisions engenders stigmatization, discrimination and even violence against people engaged in (or suspected of engaging in) the prohibited behaviour, which can further place the health of vulnerable people at risk. Indeed, the individuals facing punishment tend to be members of poor, marginalized and vulnerable groups, as opposed to wealthy individuals engaging in the same behaviour. Moreover, such criminalization affects not just those against whom the law is directed, but negatively impacts the rights of entire populations by giving states power to interfere with individuals’ private decision-making and forcing people to conform to strict sexual and gender norms. Using the force of state machinery to achieve illegitimate aims relating to the public morality can further lead to an environment generally permissive of arbitrary arrests and detention, harassment, stigmatization, discrimination and violence. Such use of power also weakens respect for the rule of law….

“It is vital to understand the extent to which criminalization has permeated states today and the damage which is done by such measures masquerading as legitimate public health or public morality initiatives. This Primer details the major areas of concern and the harm which both direct and indirect criminalization inflict on an individual’s human rights and the health of society as a whole. It is not enough, however, to simply understand the problem of criminalization of sexuality and reproductive decisions; steps must also be taken to challenge it. The Toolkit provides concrete campaigning techniques such as mapping stakeholder participation and power, identifying advocacy targets, and building capacity. The Training Manual can be used to build understanding and capacity around these issues for a range of audiences and activists.”