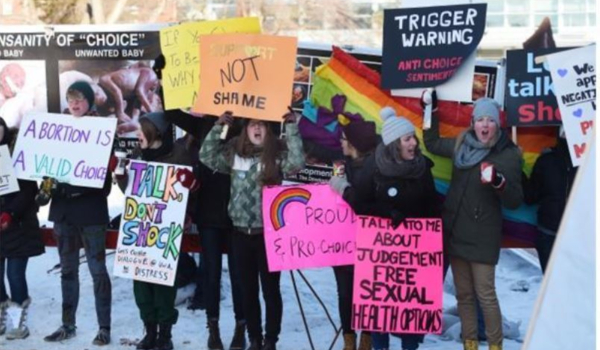 On 14 March a candidate for provincial office in the upcoming May elections said she had been approached by constituents about anti-abortion demonstrations taking place outside a number of schools, including, it seems, a kindergarten. The protesters were filmed and the video, uploaded to social media, showed that a number of the students were visibly upset by the demonstrations and the horrible, misleading visuals they used.

The candidate called for changes to the government’s anti-abortion demonstration laws. The next day, members of the provincial government responded positively. The Minister of Justice and Solicitor General Kathleen Ganley said the footage of the protest was very “troubling” and agreed to look at how government can protect students. She said: “We should be looking at putting ‘bubble zones’ around schools… I’ve had a chance to talk to my colleagues in health and education… I think that we would absolutely be looking to expand that legislation to include schools. Those were some very brave students, but I don’t think that they should have had to deal with that. I think when it comes to protecting children from incredibly graphic images like that, I think that it’s something that we can and ought to act on.”

Health Minister Sarah Hoffman said the same day that the provincial government would amend the existing legislation to extend abortion protest bubble zones around all schools from kindergarten to Grade 12 in Alberta. “It’s completely uncalled for,” she told Postmedia on 15 March. “Anyone who thinks it’s OK to engage in that behaviour, be forewarned – it’s not – and our government would take steps to make sure it’s completely outlawed.” However, with the May elections coming, she was uncertain whether the legislation could be passed right away.

It seems from the article attached to the photo above and others, that these anti-abortion demonstrations have been going on since at least 2015. The current law against them, passed about one year ago, prevents anti-abortion protesters from setting up such “demonstrations” anywhere within 50 metres of a health clinic that provides abortion services.