The experts reiterated their alarm expressed since August 2021 at a series of restrictive measures that have been introduced since the Taliban’s takeover of Afghanistan, particularly those concerning women and girls. “Taken together, these policies constitute a collective punishment of women and girls, grounded on gender-based bias and harmful practices,” the experts said.

“We are concerned about the continuous and systematic efforts to exclude women from the social, economic, and political spheres across the country.” These concerns are exacerbated in the cases of women from ethnic, religious or linguistic minorities such as the Hazara, Tajik, Hindu and other communities whose differences or visibility make them even more vulnerable in Afghanistan, they added.

The experts also noted the increased risk of exploitation of women and girls including of trafficking for the purposes of child and forced marriage as well as sexual exploitation and forced labor.

These exclusionary and discriminatory policies are being enforced through a wave of measures such as barring women from returning to their jobs, requiring a male relative to accompany them in public spaces, prohibiting women from using public transport on their own, as well as imposing a strict dress code on women and girls.

“In addition to severely limiting their freedom of movement, expression and association, and their participation in public and political affairs, these policies have also affected the ability of women to work and to make a living, pushing them further into poverty,” the experts said. “Women heads of households are especially hard hit, with their suffering compounded by the devastating consequences of the humanitarian crisis in the country.”

Of particular and grave concern is the continued denial of the fundamental right of women and girls to secondary and tertiary education, on the premise that women and men have to be segregated and that female students abide by a specific dress code. As such, the vast majority of girls’ secondary schools remain closed and the majority of girls who should be attending grades 7-12 are being denied access to school, based solely on their gender.

“Today, we are witnessing the attempt to steadily erase women and girls from public life in Afghanistan including in institutions and mechanisms that had been previously set up to assist and protect those women and girls who are most at risk,” the experts said in reference to the closure of the Ministry of Women’s Affairs and the physical occupation of the premises of the Afghan Independent Human Rights Commission.

“Various vital, and sometimes lifesaving, service providers supporting survivors of gender-based violence have shut down for fear of retribution, as have many women’s shelters, with potentially fatal consequences for the many victims in need of such services.” Other efforts aimed at dismantling systems designed to prevent and respond to gender-based violence have included discontinuing specialized courts and prosecution units responsible for enforcing the 2009 Law on the Elimination of Violence Against Women and preventing many women aid and social workers from being able to fully perform their jobs and assist other women and girls.

While these measures have affected women and girls of all spheres of life, the experts highlighted their particular concerns for women human rights defenders, women civil society activists and leaders, women judges and prosecutors, women in the security forces, women that were former government employees, and women journalists, all of whom have been considerably exposed to harassment, threats of violence and sometimes violence, and for whom civic space had been severely eroded. Many have been forced to leave the country as a result.

“We are also deeply troubled by the harsh manner with which the de facto authorities have responded to Afghan women and girls claiming their fundamental rights, with reports of peaceful protesters having been often beaten, ill-treated, threatened, and in confirmed instances detained arbitrarily,” the experts said.

“We are also extremely disturbed by the reports of extrajudicial killings and forced displacement of ethnic and religious minorities, such as the Hazara, which would suggest deliberate efforts to target, ban, and even eliminate them from the country.”

The experts reiterated their call to the international community to step up urgently needed humanitarian assistance for the Afghan people, and the realization of their right to recovery and development. The financial and humanitarian crisis has been particularly devastating for groups in situations of heightened vulnerability within the Afghan population, particularly women, children, minorities and female-headed households. At the same time, the international community must continue to hold the de facto authorities accountable for continuous violations of the rights of half of the Afghan society and to ensure that restrictions on women and girl’s fundamental rights are immediately removed.

“Any humanitarian response, recovery or development efforts in the country are condemned to failure if female staff, women-led organizations, and women in general – particularly those from minority communities – continue to be excluded from full participation in the needs assessments as well as in the decision-making, design, implementation and monitoring of these interventions,” the experts said. 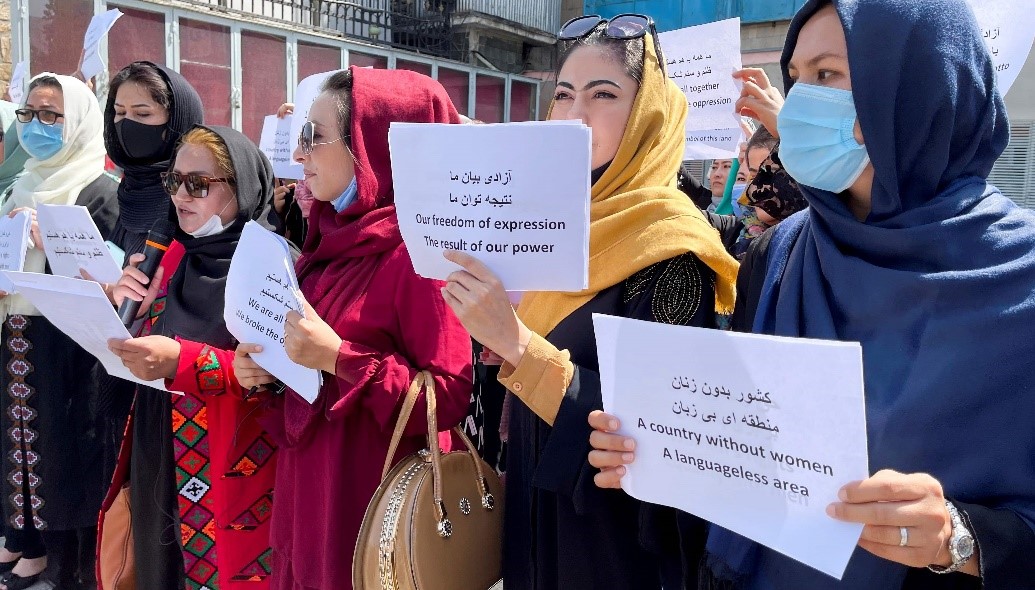 Afghan women respond from outside Afghanistan

In the previous civilian government, over 27% of the workforce holding government jobs were women. However, when the Taliban took control, it ordered all the women to stay at home and announced that the resulting vacancies would be filled by men only.

That the government consists of only men is a testament to how serious the Taliban is. For example, when the militants ordered women to leave their workplaces, a group of women staged a protest against the announcement. In response, the militants beat them with whips and sticks. Taliban spokesman Zabihullah Mujahid reasoned that there is no proper system in place to ensure women’s safety. All women, except those in the public health sector, were “asked” to stay away from work, until the security situation improves.

A new dress code for women in colleges and private universities has also been announced, under which women students, teachers and staff are ordered to wear an abaya and niqab that covers the hair, body, and most of the face. The clothes must be black and women must also wear gloves to cover their hands. This order triggered an online campaign by Afghan women from across the world (photo above). They shared photos of themselves on social media in colourful traditional dress, with hashtags like #DoNotTouchMyClothes and #AfghanCulture to emphasise the fact that traditional Afghan women’s clothing is a far cry from the Taliban’s conservative dress code.

SOURCE: World Is One News, undated. PHOTO: Reuters. (A detailed article with many photographs that explain more than words can ever do.)