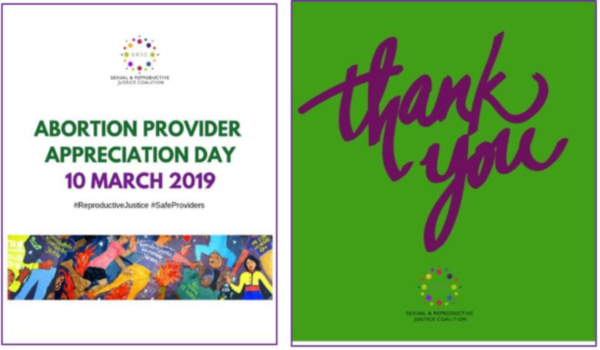 Today, 12 March 2019, the SRJC hosted an event in Lentegeur Hospital in partnership with the Western Cape Department of Health, to celebrate abortion providers, along with Triangle Projects, Mothers4Future, medical students and abortion providers from the Western Cape.Some 70 providers, mostly nurses, attended. Provincial Minister of Health,Nomafrench Mbombo, spoke and said abortion should be accessible to anyone who chooses to have it, because access to health services is a human right. But she also acknowledged that many women are being left behind. James Kruger, Acting Chief Director of Health Programmes, said thatabortion is a fundamental right and has been accepted as such internationally. SRJC’s Board Chair, Sr Judiac Ranape, thanked the Department of Health and providers for their work and led a discussion during the event. Portia Hudsonberg shared a message from medical students to providers to thank them for their work. Ipas, Marie Stopes South Africa, Médecins sans Frontieres South Africa, and Centre for Social Science Research participated as well.

Among the other speakers, Dr Judy Kluge spoke about the reality of burnout for providers, and acknowledged that abortion providers continue to work in spite of it. She encouraged providers to look after themselves as well.Sr Sylvia April encourages providers to be more passionate and compassionate in their work of abortion provision.And Prof Margaret Hoffman spoke about her experience as an abortion provider in the 1960s and her influence on the South African law reform in the 1990s. Marion Stevens closed the event by providing input on the language used in relation to abortion, continuing obstruction to access and the need to address inequalities and realise reproductive justice.

SRJC created a small online communications kit which included a template for the thank-you cards that they gave to abortion providers and hashtags such as #CelebrateLegalProviders and #Legal&SafeProviders.