Home » News » Abortion pills to be free of charge in New Brunswick, but what about across Canada? 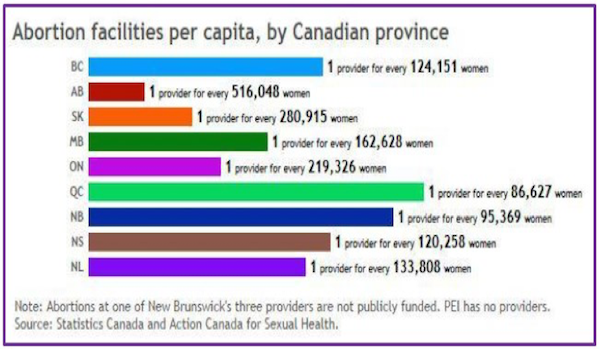 The New Brunswick Health Minister Victor Boudreau said he wanted to reduce financial barriers to a woman’s right to choose. Any woman with a valid Medicare card would be able to get Mifegymiso (combi=pack of mifepristone + misoprostol) free. The abortion pill can currently only be obtained by doctor’s prescription, and only 24 doctors and pharmacists in New Brunswick have completed or registered for the training required to prescribe and dispense it, respectively, according to the Society of Obstetricians and Gynecologists of Canada. It could take several months before the Health Department gets the programme going, because of the need to negotiate the best possible price for the drug, Boudreau said.

“Your government has eliminated barriers to reproductive health that were in place for three decades and is committed to doing more,” Boudreau said in the news release.

There are still concerns, however, about whether physicians and pharmacists in New Brunswick will take the training they need to prescribe the drug. And before getting a prescription, a woman must have an ultrasound to make sure she is within the 49 day time limit the drug label allows for its use, an out-of-date limitation. Moreover, it sounds as if the costs of two doctor visits and an ultrasound must still be factored in as costs.

A long-awaited report on the abortion pill, published on 20 April by a Common Drug Review expert committee, is recommending that provincial and territorial governments cover the $300 cost of the medication, according to the Globe and Mail. The report’s endorsement is a crucial step toward taxpayer-funded reimbursement for new drugs in Canada, including Mifegymiso which pro-choice advocates hope will eventually make abortions easier to obtain outside big cities.

Mifegymiso’s Canadian distributor, Celopharma, submitted cost estimates for the medication compared with other abortion methods. for the review. After identifying several “limitations” in Celopharma’s figures, the committee conducted a reanalysis that concluded the cost of an abortion with Mifegymiso would be $610, even though the pills cost only $300. It is presumed that includes the cost to the public healthcare system of two visits to a doctor and an ultrasound, which Health Canada stipulates in its guidance on the drug.

Every province except New Brunswick, who already took a decision, had said it would wait for the CDR report before deciding whether to list the abortion pill. Thus, provincial drug plans will not automatically cover Mifegymiso, nor all cover the same categories of women.